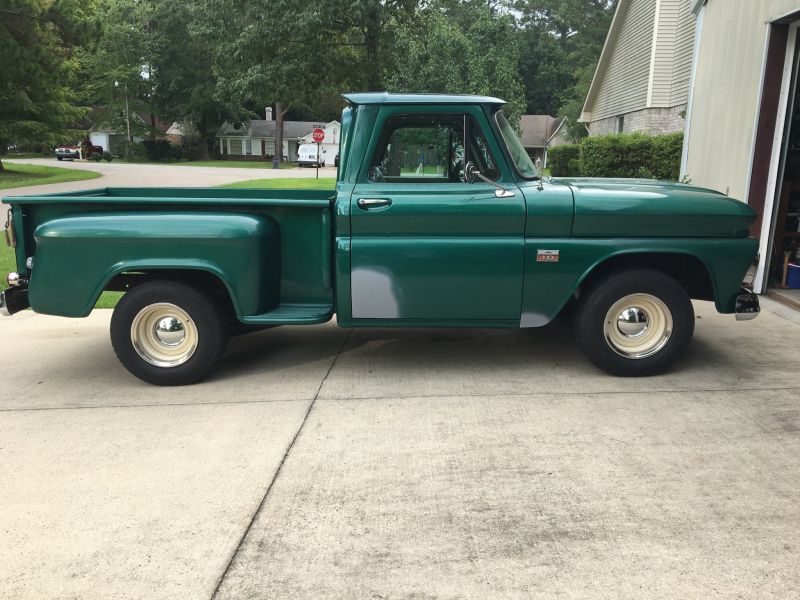 This is an awesome C-10 truck for sale that has lots of muscle under the hood and is a lot of fun for cruising!
It comes equipped with a modified 350 8 cylinder engine with approximately 30,000 miles on it and has a 700R automatic transmission with overdrive. It is a 2 door truck, 2 wheel drive, and has a short bed and step side. The chrome is in great shape and the wooden bed with stainless steel strips is also immaculate.

The exterior is a very cool metallic green with patina, and the interior is in great shape that is a tan cloth that came from a Silverado truck and is 60/40. The truck is an 8 out of 10 condition and this would be a great buy to cruise in, use as a daily driver, take to shows, or you could even turn it into a show quality/trophy winning truck if you pleased.

Some of the features of the truck are as follows;
CD Player, MP3 adaptable with Bluetooth, AM/FM radio, Vintage air conditioning, heater, some records and receipts have been kept, always well maintained, and partially garage kept year around in a temperature controlled environment. The truck is originally from California, new exhaust system, aluminum heads, roller rockers, new battery, new starter, the rubber molding has all been replaced, steel wheels with baby moon hubcaps and trim rings, and cream colored wheels to match the truck! There is a lot more into this truck as well so don't hesitate to ask when calling. The truck currently has fresh fluids, has a clean title, and is currently insured and ready for test drives.

Please call Thomas at the phone number above to see the truck, ask questions, or to make an offer (NO LOW BALL OFFERS PLEASE). No reasonable offer shall be refused. If you are flying in to see the truck after a phone conversation the vehicle is closest to the Louie Armstrong Airport in New Orleans Louisiana. Thank for looking!