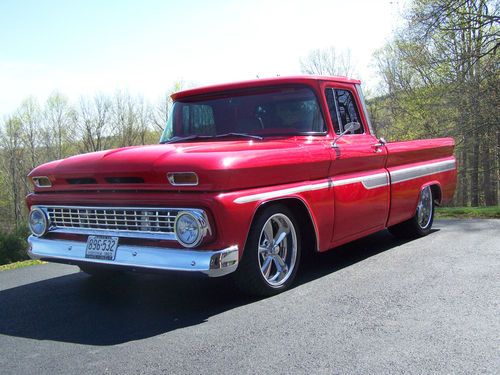 Up for sale is a GREAT 1963 Chevy Custom C-10 Pickup. Dupont Scartlet Red Paint with exceptional graphite graphic trim work.  The truck sits on a new set of Billet Specialities Mag wheels  with a new set of Mickey Thompson Sportsman SR raidal tires with air ride system on the rear.  Front tires are 26 x 8 x 18 and the  rear aree 29 x 15.50 x 15 under the widen wheel wells.  The truck has HID headlights and LED tail lights.  A smooth tailgate with rollpan makes following the truck a pleasure.  The interior has a set of new model tan leather chevy bucket seats with matching console. The dash has a new set of Dolphin Guages and and a tilt steering column.   Now to the good stuff, the power house under the Dakota digital assisted tilt front end is a Chevy ZZ-383 crate motor that has a Holly750 double-pumper, comp cam, mother thumper roller rockers, Hooker headers and a chrome front runner system with a newly built 200/4R overdrive transmission with a Gear Star 2500 stall convertor.  It also has a 9" Detroit Locker rear end with 430 gears.  Vintgage air keeps you cool and the tunes are delivered through a Alpine stereo with kenwood amp pushing a speaker system.   Any questions call Tim at (276)-233-7478..