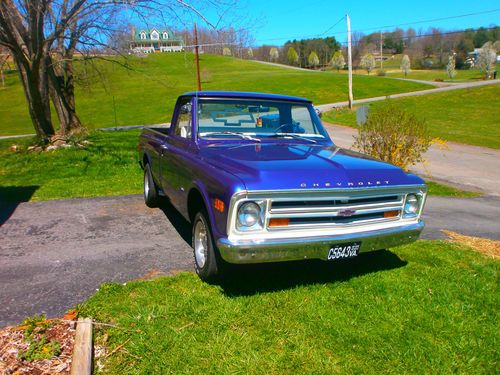 The interior of this truck is beautiful, custom stitched with bowtie chevy emblem in the middle of back part of seat, the dashboard matches.

The exterior color is a deep purple and will have a blue tone depending on the lighting.

All gauges are functional. Wiper has a delay added. Tape player am/fm radio.

It is an automatic with slapshift shifter.

Rims are PACO with good tire tread. Rear wheel larger to give that hotrod look..

It has a clear title.

This is one beautiful, FAST truck that has never seen salt roads, has always been garage kept, as you can see by the pics, no rust and underneath clean enough to eat off of.

if you have any questions, please contack me. May be interested in other vehicle offers.