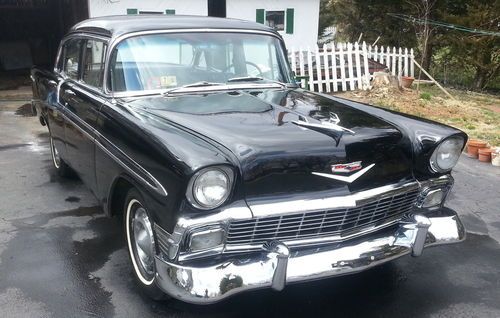 Condition: Used: A vehicle is considered used if it has been registered and issued a title. Used vehicles have had at least one previous owner. The condition of the exterior, interior and engine can vary depending on the vehicle's history. See the seller's listing for full details and description of any imperfections. ...
This is a beautiful 1956 4-door Bel Air.  The car was purchased new in 1956 and has never left the family!  It was passed from generation to generation and has been meticulously cared for.  The car went through a frame off restoration 15 years ago and has been updated and modernized.  Since the restoration, it was a daily driver for four years and has waited covered in a garage until now.  Only taken out for cruise-ins and beautiful days in the past 10 years, there are fewer than 5000 miles on the restoration!
A brand new 350ci motor was installed and upgraded with 64cc Edelbrock aluminum heads and Edelbrock aluminum intake.  It has a Performer RPM cam, roller rockers, electronic ignition, and dual exhaust with Cherry Bomb mufflers.  All new stainless fuel lines feed a 650 Holley carb.  Backing that new motor is a classic 3-speed with column shifter.  A limited slip differential gets the power to the pavement.  The sound of this thing rolling off idle and climbing the revs is just hypnotizing.  Idling through a parking lot with that rumble causes heads to turn and thumbs-up to appear all around.
During the restoration, the body was professionally blasted and stripped before being brought back to this incredible black finish.  All chrome was replaced or refinished.  All the body gaskets and bumpers have been replaced.  The floor pan and rocker panels were replaced while the hood and fenders were professionally repaired.  The interior has new carpet, new door panels, new headliner and has been upgraded with front 3-point seat belts.  The dash clock was professionally repaired and the radio is aftermarket with 10 disc changer.  There are new kick-panel speakers with buttons for the power door locks.
The front end was rebuilt with new polyurethane bushings and has been upgraded to disc brakes.  There is a new dual master cylinder with new stainless brake lines and proportioning valve.  The rear brakes were rebuilt with new wheel cylinders.  A 100A alternator and Vintage Air A/C round out the under-the-hood package.  New leaf springs and front and rear anti-sway bars improve the ride on this classic automobile.
This vehicle is a family car that has been loved, maintained, and restored by the same family.  Two generations have grown up with this car and brought it to the current state.  If you're looking for a show-queen, this isn't the car for you.  This car carried us to school and work and has been in a garage for more than a decade since its restoration.  It has been a great father/son project and now it is available for you to add its next chapter.  The body looks great with a few small cracks and defects in the paint (shown in photo).  We want you to know that you are getting an unbelievably solid and uniquely upgraded car that isn't show car perfect.  The time has come for someone new to enjoy the vehicle so don't miss out on this incredible opportunity!                                Please email any questions to AJ at cooperlabs@gmail.com or you can reach me by phone at 202.596.5238