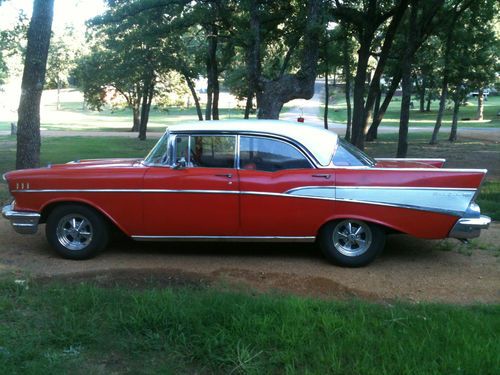 1957 Chevrolet BelAir 4 door hard top sport sedan with mostly original equipment. There are not many 4 door hard tops this nice. This car is in excellent mechanical condition and runs great. It is powered by a 283 V8 with a PowerGlide automatic transmission. The exterior is matador Red with a White top. The interior is in good condition with black carpet and a red headliner. The seats are red vinyl with black cloth inserts and have front and back seat belts.

This car is tight, all the doors, windows, and trunk move smoothly.  There are no rust spots.  This car also has Fender Skirts that are in excellent condition (not shown in pics).