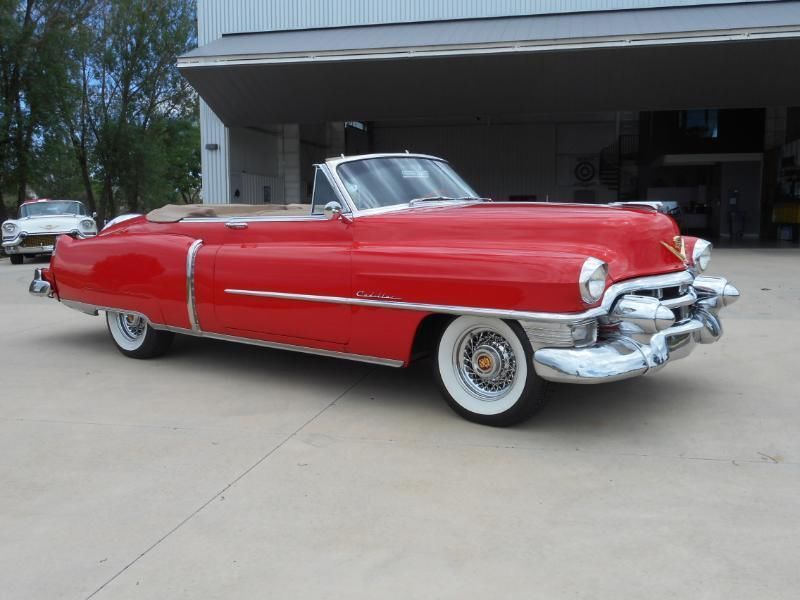 DRIVETRAIN AS INSTALLED & FACTORY (ENGINE # 536227664)
LIPSTICK (AZTEC ?) RED IS NEAR FLAWLESS {I SAY NEAR BECAUSE I CANNOT FIND A SINGLE CHIP OR
BLEMISH-JUDGE FOR YOURSELF}
ALL CHROME HAS BEEN TRIPLE PLATED ALL STAINLESS HAS BEEN BUFFED & POLISHED TO A CHROME LIKE
FINISH (A TON OF BOTH)
ALL GLASS HAS BEEN REPLACED. HIGHEST GRADE HYDES ONLY USED BECAUSE THIS IS A "NO MONEY SPARED"
REFURBISHMENT.
THIS CAR DESERVES ONLY THE BEST. DRIVETRAIN HAS BEEN GONE THROUGH RUNS-DRIVES-STEERS-STOPS-
LIKE 1953. IT HAS THE SMOOTHEST SHIFTING HYDROMATIC I'VE EVER DRIVEN.
HAS FULL COMPLEMENT OF POWER STEERING - POWER TOP - POWER SEAT & POWER WINDOWS, RADIO HAS
BEEN CONVERTED TO FM - WORKS GREAT! I'VE SEEN MANY OF THESE CONVERSIONS AND THEY USUALLY
LEAVE A LOT TO BE DESIRED.
MECHANICALLY THE CAR IS AS GOOD AS IT GETS. STARTS INSTANTLY HOT OR COLD.
4 NEW WIRE WHEELS & (AMERICAN CLASSIC / COKERWWW.) ONLY DRIVEN FROM SHOP TO THE GARAGE.
HAS A ELECTRIC FUEL PUMP WORKING CONJUNCTION WITH MECHANICAL PUMP. PETRONICS ELECTRONIC
IGNITION CONVERSION WITH THEIR HIGH OUTPUT COIL - POWERMASTER ALTENATOR (75 AMPS) DISGUISED
AS A GENERATOR.