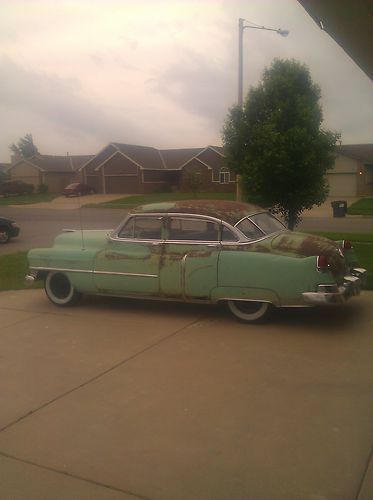 1951 Cadillac series 62 sedan. When I got this car the trans was out. I bought it for the good running 331 V8. So rather than let it sit in a a field I decided to put a small block chevy engine and 350 turbo trans it. The brakes are all new and stops very well with new lines and hoses. The fuel tank was cleaned and new line installed. The engine is out of a late 70s camaro and runs very good.I believe it to be a 305 H.O. I didnt go completely through the engine because I heard it run before we installed it and was very clean. The intake valley and crankcase were spotless as well. The transmission is brand new and shifts like a dream. It also has a nice rochester 4 barrel on it. Seems to do good on fuel. New billet distributor, pulleys, one wire alternator, water pump, radiator and fuel pump. I had to make the y pipe fit into the x member and it looks good. There are many new parts. I put in a new fuse box and installed new wiring. I tried to keep many original features, such as shift lever and throttle pedal. Fuel gauge works, head lights, tail lights, and rear turn signals also. I was pleasantly surprised how well this car drives and cruises! It will cruise down the highway at 80 mph with about 1/4 throttle left(must have higher rear gear). New coker 8.00X15 wide whites, about $1000 in rubber. Original wheels were blasted and painted black. The car has an era correct spare tire and wheel with 3 original hubcaps in the trunk. Car will start up and drive wherever you want to go.
There are a few needs like any car-No carpet on interior floor-speedo broke on the last drive-rust under rear doors-interior is in overall worn condition-front turn signals need new wiring and sockets-
Good reliable cruiser but not show. Patina in abundance on this jewel.
Clear Kansas title
Payment due within 7 days