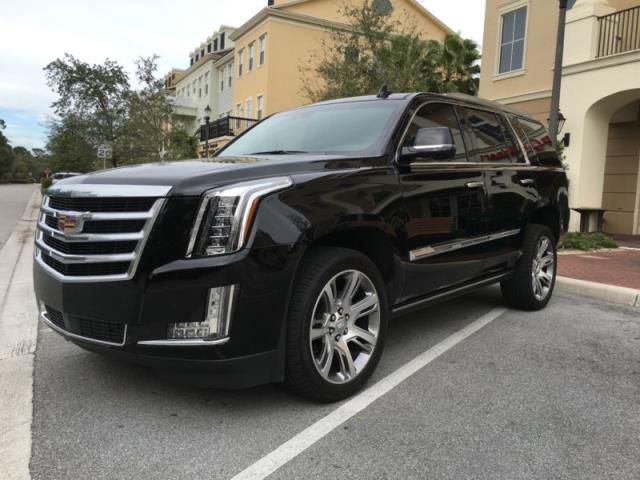 This is a 2015 1/2 Cadillac Escalade Premium 2WD with Kona leather, Power running Boards, 22" ultra bright wheels. The later 2015 production on the new Escalade is evident by the new style grill, tailgate emblems, nicer side view mirrors. But also includes the new 8 speed transmission, 4g wifi, wireless phone charger on console, 360 degree surround camera, etc. There were significant enough changes that i traded in my early 2015 for this one. The most notable difference was the aesthetics, fuel economy, and performance due to the 8 speed transmission. The window sticker (photographed) shows the complete list of standard equipment. Some standard options for the Premium pkg. are Navigation System, Drop-Down Rear DVD Rear Entertainment, Sunroof, Collision Alert, Lane Departure Warning, Blind Spot Detection, Heads Up Display, Remote Start, Bose Premium Sound, Heated 2nd Row Bucket Seats, Heated Steering Wheel, This Escalade also comes equipped with 22" 7-Spoke Aluminum Wheels and a 6.2L V8 engine with an 8 speed Automatic Transmission, and power running boards. I'm sure you can go on Cadillac website for further details. It is truly an incredible vehicle. This one in particular is absolutely flawless. No issues, stories, or damage of any kind.