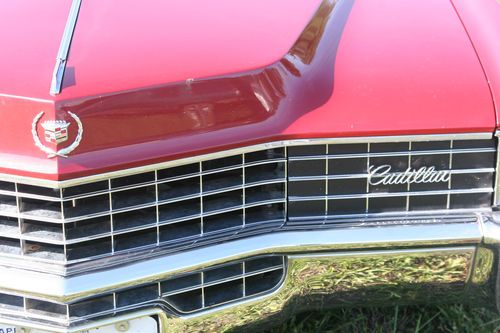 Condition: UsedA vehicle is considered used if it has been registered and issued a title. Used vehicles have had at least one previous owner. The condition of the exterior, interior and engine can vary depending on the vehicle's history. See the seller's listing for full details and description of any imperfections.Seller Notes:"Minor Scratch on Right Front Fender, and Left Rear Fender. TINY rust spot on Right Rear Bumper Tip, Minor Cracks around Window Controls on Drivers Door Panel, Parts of Body have been Repainted in past. Air conditioner compressor is locked up, and Rear windows Roll down, but NOT up with controls. Cruise Control dash cluster is not securely attached to instrument cluster, Clock is not working (stopped at 4:20 :O )"

It is a rust free straight body car. Chrome is original and in good shape for its age. Original jack kit in the trunk

AC currently not working and radio works after a few minutes to warm up.

Great addition for the Cadillac collector or your first classic.

All original sheet metal with body panels that line up all around on this beautiful ‘68. You can enjoy this Cadillac now while doing minimal to restore to its original glory.

CAR IS SOLD AS IS WITH NO WRITTEN , IMPLIED OR EXPRESSED WARRANTY