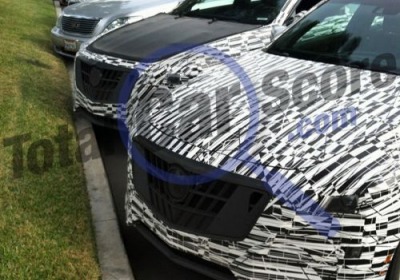 A pair of camouflaged Cadillac CTS prototypes were spotted, and thankfully photographed, outside a grocery store in Southern California. From the image above – there are plenty more if you click over to TotalCarScore.com – it appears these could be testers for the 2014 CTS-V, but that is just speculation. We've seen the obvious "V" motif in the grille before, and there's what could be another "V" in the design of the side mirrors.

The hood on the car in the background appears to include two bulges, but the single shot that affords a tiny peek under the hood shows reveals only the airbox. Plenty of rumors, and the sight of an engine cover inscribed with the words "Twin Turbo," have caused people to wonder if a twin-turbo V6 will live under the production car's hood instead of the V8 currently there. In back, instead of the round tailpipes found outboard on all the CTS sedans, there's a pair of integrated tips in a parallelogram shape. A new shifter with contrasting stitching was spied in the cabin.

If predictions hold up it will arrive later this year. When it does, expect the body underneath all that camo to be softer on the eye compared to the current car – less science and more art. For now, hit the link to see more spy shots of what's coming.