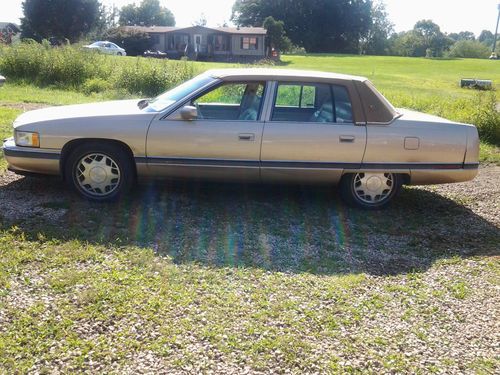 Condition: UsedA vehicle is considered used if it has been registered and issued a title. Used vehicles have had at least one previous owner. The condition of the exterior, interior and engine can vary depending on the vehicle's history. See the seller's listing for full details and description of any imperfections.Seller Notes:"a hole in back seat and scratch-missing trim at left back tail light"

this 1995 gold  Cadillac Deville is a 2 owner car, 2nd owner bought in 2005 and has only put a little over 6000 miles on it.it has 4 doors, with am/fm stereo cassette. power everything. heated leather front seats, and leather back seats, which does have a tear in drivers side. has current inspection. has a vinyl top which is in good condition. it has Michelin tires on it which has great tread. it is kept in a garage covered with car cover. it is rarely driven.  the car has 73,676 miles on it and gets great gas mileage. don't know the exact number. im listing for elderly family member