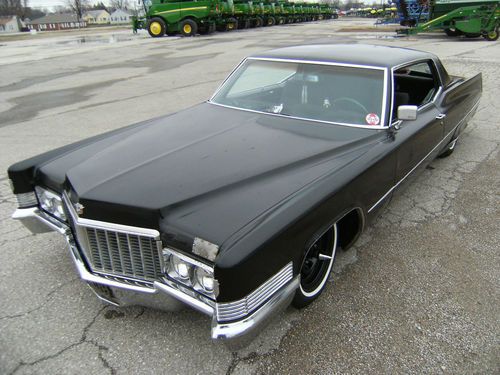 1970 2dr hardtop Cadillac
this car is a cruzer i have owned it for 6yrs and put 25 thousand miles on it
i drove it on the interstate many times and it's a great running and driving car
it has a 472 caddy motor and 400 turbo tranny i havent done anything to the
motor except ditch the junk stock carb and replaced it with a Edelbrock 600cfm
and serivced the tranny i just put new tires on it i staggered the tires bigger in
the back smaller up front there all the same brand the black paint is brushed on
the car for the look it had patch panel work done by the previous owner and
when i bought the car it had sat for 6yrs so the body filler was cracking so i
knocked it out and did the riveted on panels you see on it now that was the
look i wanted they could easyly be done correctly for a original look the interior
is in pretty good shape the top of the back seat and the top of the passinger
seat has torn from sun damage it has power seats power door locks power windows
and they all work great and the steering wheel tilts and teliscopes out the chrome
and rubber weather strip on the driver side that seals the front driver window to
the rear quarter glass is missing thats the only thing that i know of and i had to
lose the cruz control when i changed the carbs out i have the stock hub caps that
came on it ........thanks for looking if you have any questions call Brad at 812-216-3754