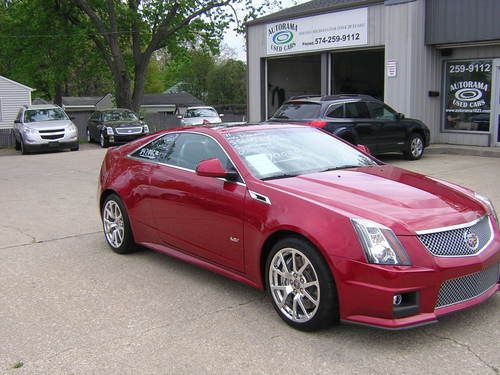 Luxury race car!!! Red 2011 Cadillac CTS-V coupe- High performance Supercharged 6.2 Corvette V8,AT,full power-sunroof,navigation,ALL CADILLAC OPTIONS, light beige leather interior. ONLY 3200 miles. This car has a rebuilt Indiana title due to very minor water damage that effected nothing. There was no signs of water in this CTS and there  are no issues with this car now or later.It was inspected by the police before we could title it.100% ready to go-super low miles and a super sharp car!!! Priced way below retail. Ultimate Cadillac touring car!!!Carfax available. vin-1G6DV1EP1B01644

Autorama
1023 W.Jefferson Blvd.
Mishawaka,In 46545
574-259-9112   --Hours M/F 9am to 6pm &Sat. 9am to 2pm EST
We are a licensed Indiana used car dealer. We specialize in salvage and rebuilt titled vehicles and have done this for over 20 years. We have many repeat buyers on our cars. We fully go through all our vehicles before we sell them. You are buying great low mileage late model vehicles at way below wholesale. Feel free to call us for info
This CTS is offered for sale locally so we reserve the right to close or cancel this auction at any time
$500 deposit due within 24 hours of the close of the auction. PayPal or certified funds only.