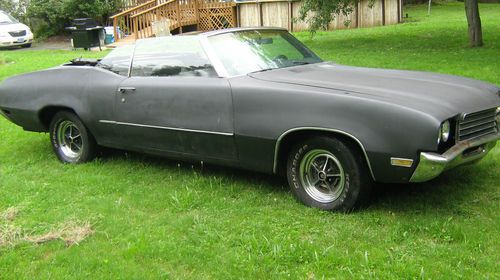 This is an auction for my 1971 Buick Skylark Custom Convertible. The motor is out of a 1972 Buick Skylark. It is a 350 4 barrel. I replaced the quadrajet with a rebuilt Holley. I also just replaced the radiator. I also installed an electronic ignition set up out of a 75 Lesabre ( I think ). The transmission is a  th350. I still have the original 2 barrel intake and carb with air cleaner and the distributor with the points set up and the exhaust manifolds. The exhaust is headers with flowmasters. I have recently put in a new gas tank and trunk pan. I have brand new quarter panels that I haven't even taken out of the box yet. I also have 4 additional rims with tires. The top is rough. I leave it in the down position. I have the pistons and lines for it, but I do not have the motor. After running for a short time, the motor smokes. I don't hear any knocking or rapping. I thought that it was the carb which is why I replaced it but it didn't solve the problem. It is running rough but starts right up. I had a little frame work done in 2 spots. As as I know, the rest of it is o.k. I have most of, or maybe all of the chrome. I have 3 center caps that are not on the car. Some twit stole the 4 that I had. I no longer have the time or resources to continue working on the car. The car is for sale on my lawn. I reserve the right to end the auction early if the car sells here.