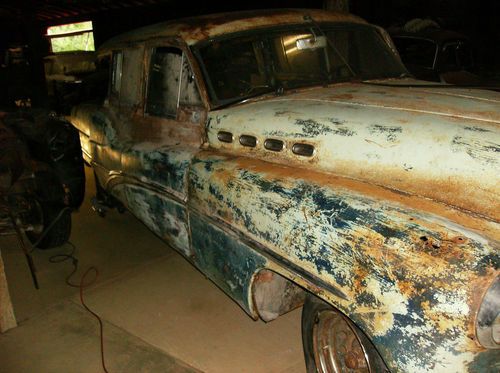 Condition: UsedA vehicle is considered used if it has been registered and issued a title. Used vehicles have had at least one previous owner. The condition of the exterior, interior and engine can vary depending on the vehicle's history. See the seller's listing for full details and description of any imperfections.Seller Notes:"Very RARE only 420 built. Most were scrapped by the mid 60's. It needs a wood kit, they are availalbe and a nice rust free 1950 Buick Roadmaster 4DR Sedan parts carto complete. Has rust in floors, rocker panels and bottoms of doors. The guy I purchased it from took every nut and bolt apart that he could and lost them all and most of the smaller parts. Everthing missing and needed will be on a 4DR Sedan. It was a basket case and is held together with a few bolts for pictures. It needs a complete restoration and a parts car to complete it."

1950 Buick Roadmaster Estate Wagon WOODY needs wood kit that is available and 4DR Sedan parts car to complete a Total Restoration. It has rust in the floors, rocker panels and the bottom of doors. Call with any questions Jim 440-236-1959 I can send more pictures on request.