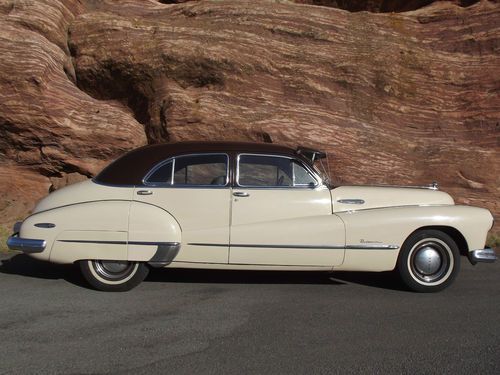 I've owned my 47 Roadmaster since 2000.I had Pauls grinding machine shop ( Denver Colorado) do all the machine work. They bored the motor 20 over,new pistons,rings,cam,lifters valves,oil pump waterpump. While the motor was out, I had the flywheel surfaced and a new cluch and through out bearing installed. The trans was gone through at this time along with the radiator. The starter and generator were both gone through and had brushes put in them. The motor has a luberfiner oil filter on (modle 200 S) All the hoses and belt were replaced with new.along with a new battery. I put a new master brake cylinder in it along with new shoes and tires.The car came to me in primer,and shows no signs of rust.I was told the car had never been wrecked,and in inspections show everything is nice and streight.The underside of the car and the finders and hood have a heavy undercoat.The paint is new,and the interior is new (cloth).They headliner is new and came from LeBaron Bonny.The stainless on the car is nice,the bumpers are streight but could use new chrome.The door handles and interior chrome are pitted.All the gauges work great.All the lights work great inside and out on the car. The radio works fine the push buttoms work fine but are all sun cracked.The only thing that doesn't work is the clock.(it works and stops all the time)  It has vacume wipers that are real slow,and also has windshield washers that work fine.I'm selling this car because I have to many.I've put about 3000 miles on the new motor and have changed the oil and filter twice.The car starts and runs great. This car is all original and is a nice driver.I've invested over $18,000.00 in it. I've done my best to discribe the car and give no warranty. Please ask queations,you can call me at 303-697-1067  (RON )  The winning bidder must pay $1000.00 down with in 24 hours after auction ends.The car an title will be shipped at buyers expence when complete payment has cleared  ( bank transfer or cash ) I'll be happy to assist in shipping,but it is the resonability of the buyer to line up shipping and pay shipping charges.Please check my Ebay rating, I've been a member for a long time and am 100%