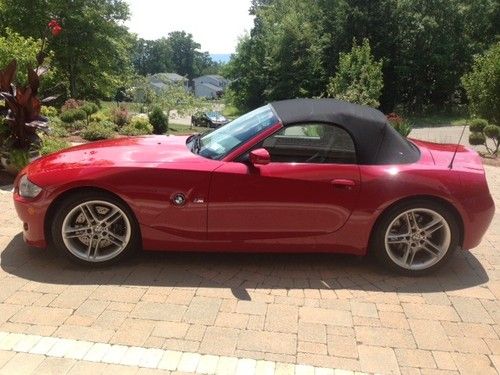 Condition: UsedA vehicle is considered used if it has been registered and issued a title. Used vehicles have had at least one previous owner. The condition of the exterior, interior and engine can vary depending on the vehicle's history. See the seller's listing for full details and description of any imperfections.Seller Notes:"Excellent condition. Original owner. Low miles. Garaged"

I am original owner of a beautiful 2006 M Roadster bought new March 2007. I have all records and books, two keys, and original window sticker.  None nicer!

BMW may keep next 1 Series out of the US

As BMW prepares to introduce the all-new 2 Series coupe and convertible, the 1 Series name definitely won't be going away. We know new sedan and hatchback models are in the works; including the GT shown above. According to Car and Driver, though, the future of the 1 Series nameplate in the US could be dependent on rival premium small cars like the Mercedes-Benz CLA-Class and Audi A3.
In an interview with C/D, BMW's North American head of product planning and strategy, Paul Ferraiolo, said that pricing might be the biggest deterrent to offering the third-gen 1 Series in the US. As he points out, BMW currently prices the 1 not too far from the 3 Series, but Mercedes-Benz and Audi will have their new small cars priced well below the $30,000 mark. BMW's Mini brand will also factor into the consideration since the 1 GT will share its underpinnings with the next-gen Cooper lineup.