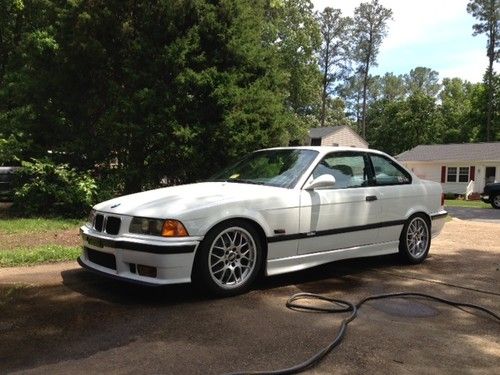 E36 M3, chasis has 118k miles, motor has 60k, 4k on swap.  Car was good, completely stock shape when I started the swap. During the swap I replaced anything that needed to be replaced throughout the car(diff seals etc).

Heat and AC work.  All new fluids(engine/diff/trans).  Car was done with correct, not cheap parts, by me.  I have been building great BMW's for adults for years.
The car is rust free.  All the bolts underneath show clean, car looks like a good southern car.  I didn't know the car was in accident until I listed it.  I have been all over it and can't see any repairs.  Even the original front support(sheet metal) was
still welded on and not bent at all(clean).  So I assume the hits were light.
S50B32 321 hp euro motor.Euro oil coolerEuro catsEuro intakeEuro radiatorEuro expansion tankUS 5 speedEuro gauge clusterStock MSS50 DMEBilstein Pss9'sBBS WheelsMany new seals/oil seperator etc..Vanos rebuiltNew shifter bushings.New brakes/(hankook tires)Solid caliper guides.LTW flywheel, new sachs clutch.Too much too list.Car was gone through during the motor swap. It was a completely stock car in good condition before the swap.

The first collaboration between BMW and Pininfarina is this blunt-force two-door called the BMW Pininfarini Gran Lusso Coupe revealed at the Concorso d'Eleganza Villa d'Este. Said to be the "interpretation of a luxurious BMW Coupé as seen through the eyes of Pininfarina," once you get past all of the design-speak, you can focus on the full-bodied and keen-edged missile sitting on 21-inch wheels.
The long wheelbase makes for short overhangs. Up front, BMW's design language gets scraped across a whetstone, everything getting sharper, including the usually round cat's eye headlights that have gone dihedral. Under the hood is a V12, behind the twin-kidney grille in matte-sheen aluminium and high-gloss black. The same aluminum treatment also backs the taillights, the lenses designed to let air flow through them.
Inside is room for four, a cockpit canted toward the driver, Foglizzo leather in black and Tobacco Brown, 48,000-year-old kauri wood from New Zealand, deep pile carpet on the floors, a patterned virgin wool headliner and an "oblong aperture in the roof liner" set off by white LEDs.