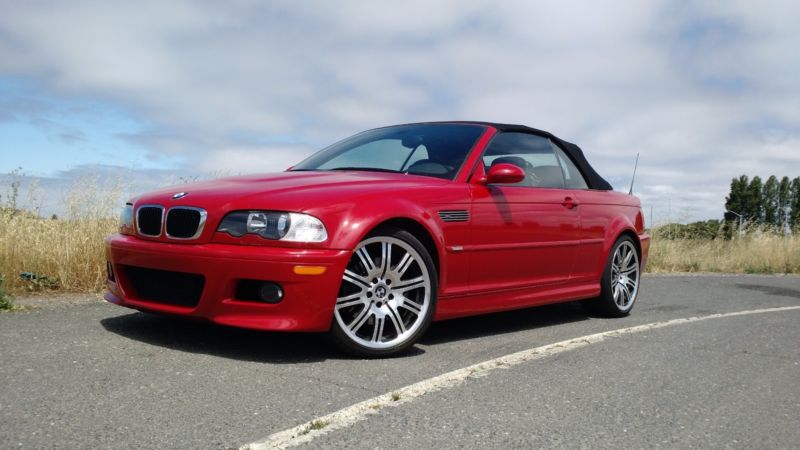 "Drive it for a day and you'll be amazed by the immediacy of its responsiveness and by the sheer explosiveness of
its straight line performance. You'll soon start to wonder why anyone else would bother trying to build a rival to
such a car." -- Autocar
"The selection of mechanical melodies generated by the 3.2 litre straight six engine residing under the bulging
bonnet of this ultimate variation on the BMW 3 series theme tops any comparable powerplant that I've ever tuned
into before." -- Top Gear Magazine
"BMW have launched themselves into a new class, invading Ferrari/Porsche high ground." -- CCC Magazine
The Ultimate Driving Machine
I have decided to part ways with my pride and joy. Garage kept and pampered throughout its life, this E46 M3 is
nothing short of special -- a true privilege for car lovers alike or the BMW enthusiast. The car's power is matched
with its smooth delivery in a straight line and around the corners. The immersive driving experience is only
emphasized by the heightened control of the six-speed manual transmission. And the Imola Red paint will leave you
and everyone around salivating every time you see it.
This car has a pristine 10/10 exterior. The paint shines like new and there isn't a scratch or ding. The interior
scores a 9.5/10, with only minor signs of age. The leather looks brand new, and sometimes I still swear I smell the
"new car smell."
Mechanically, the car is also a perfect 10/10. Having only been driven on highways over the weekends, everything
from the engine to the convertible motor runs like new. I have had no issues with the car, and have made no
modifications. This is a complete, straight out of the factory OEM BMW E46 M3.
Extras Included
Windscreen
Bavarian Autosport Weatherproof Car Cover
Any leftover motor oil and oil filters
The BMW M3 Vital Statistics
Engine & Power:
3245cc 6 cyls in line - 343 bhp at 7900 rpm
0-30 mph 2.0 secs. 0-60 mph 4.8 secs.
23.7 mpg (average)
The Other Goods:
six-speed manual, rear-wheel drive, M-branded limited-slip differential
performance suspension includes uprated MacPherson struts with anti-roll bar
powerful brakes include three-metal-compound vented discs
staggered wheels to maximize cornering and liftoff traction