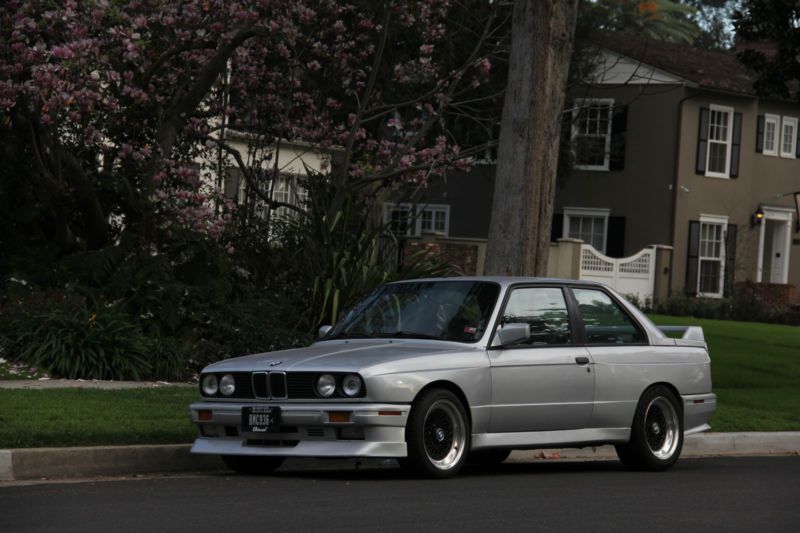 Please email me with any questions or requests for additional pics or something specific at: charlettecsschee@swindonfans.com .

Up for sale is my daily driver BMW E30 M3 with an obd1 s52 e36 M3 engine swap. This car has been my daily for the
last two years which includes two trips to Montana where the only stops made were for gas. One of those return
trips was a cruise out to Portland, down through the Redwood Forests, Napa Valley, and back into LA. I wouldn't
hesitate to drive this car cross country and is exceptionally comfortable as well as economical. I'm only selling
her to fund another project I have in the works.

Build:
The block is from a '98 M3 and has about 83k miles on the bottom end, the head is off of a '95 m3 and has about 4k
miles on it since rebuild. The 5 speed transmission is from an '02 z3 M off of a s54, one of the strongest 5 speed
from BMW. I can't stress how much I love this transmission's gearing, and the shift feedback is the best of any car
I've driven. The differential is a 2.79LSD. The clutch style LSD is super tight and locks up exactly as it should.
Car has an unkown brand lightweight flywheel. Thanks to the combination of the z3 M transmission and the 2.79 diff,
it gets off the line very quickly but still cruises at highway speed at an acceptable RPM. The car is currently
running a miller W.A.R. chip ECU and can be easily hooked up to a computer and dyno tuned to get the most out of
any engine setup you desire. The car also has (unknown brand) shorty headers, Castro Motorsport air box (cruise
control motor was removed for the installation of the air box by the previous owner), racing dynamic adjustable
sway bars, bilstein HD struts, and H&R sport springs. The wheels are 16" Epsilon Mesh, a BMW dealer option from the
635csi and are one of my favorite parts of the car.

Planned future work:
Most obvious is that the car needs new paint, as the clear coat is in poor condition. The original color is Lachs
Silber and the previous owner painted the car Sterling but the engine bay and trunk are still Lachs Silber,
returning to the original color was my eventual plan. I was also planning on replacing the front bumper prior to
paint, as it was reattached poorly by the previous owner and has a small crack (pictured). The body is rust free
with the exception of a small spot under the wind shield on the passenger side (pictured) that will need to be
treated in the future, but no rust/rot was found hiding under the original windshield when replaced. There are two
small dents that can probably be removed through paintless dent removal (also pictured). The rear subframe bushings
and rear trailing arm bushings are original, and replacements are included in the sale.

My next project on the M3 was to recondition the air conditioning in the car but I still needed to source a e36
compressor and an e30 evaporator. As well as have the two custom lines made to complete the system. I bought the
car with a custom multi-amp stereo system in the trunk that works well, though it never has been a priority for me
on this car. It's up to the next owner's discretion whether to keep or remove it.

The driver's seat is in great condition and the passenger seat is in good shape other than some material cracking
on the upper shoulder bolster. The rear seat is in acceptable shape for its age but I had planned on eventually
recovering it. The A-pillar trim needs to be replaced or recovered as the sun as caused the vinyl to shrink and
separate from the plastic.

The car is currently driving around on the factory '88 M3 catalytic converter and muffler. It hasn't shown any
signs of needing a new cat but the muffler is starting to crack around the welds.

The car received it's rebuilt title from a driver side door incident. The original door was replaced with another
factory E30 M3 door. It has also had some sort of small repair to the rear (I would guess at the same time as the
previous incident), as I have seen hard to find signs of repair work. I don't have pictures of the accident as it
happened long before my ownership. The car tracks straight, drives well, and is always within factory alignment
spec. I just want to be honest with next owner so they have as much history on the car as possible, and get to
enjoy it as I have.

If you have any additional questions please feel free to ask and thank you for looking.