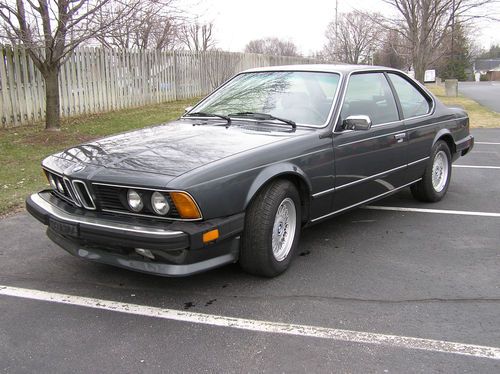 Very nice 1987 BMW 635 CSI with only 124K miles. If you are looking at this car then you already know all about them so I won't go into all that other than to say that these cars are super fast, handle like they are on rails, looks fantastic and the nice ones are bringing big money. This car came out of Georgia and is rust free. It has very nice paint and the leather interior is fantastic. The tires have about 85% tread. All of the glass is fine and all of the windows work. The engine purrs and has no unusual noises or smoke. This car has not been abused and has been well cared for.  There are two real issues with this car, the first is that the transmission is starting to slip. It runs and drives but if you get on it, it will slip. The other is that the plastic on the dash is cracked. The dash cracking is a common problem and snap on dash covers are pretty cheap on Ebay. This is a no reserve auction so it will sell after the first bid. It is located in Seymour, Indiana about an hour south of Indianapolis. I will require $500 deposit by Paypal within 24 hours and the balance in cash or certified funds within 7 days. This vehicle is sold with a clear Georgia title, as is as pictured and without a warranty, expressed or implied. Please feel free to ask any questions. Good Luck.