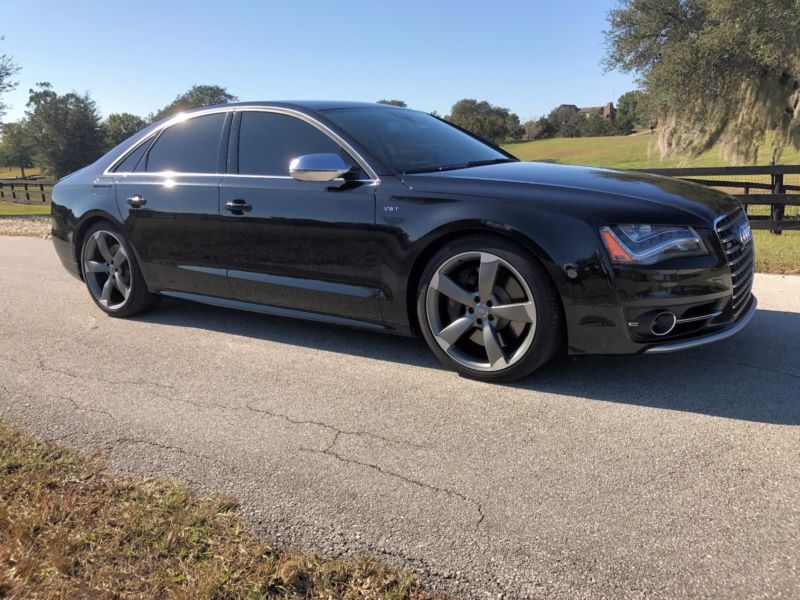 2014 Audi S8 AWD Quattro with 23500 miles. Car in in excellent condition. Car has been serviced recently at the
Audi dealership and the brakes were serviced only 3k miles ago. New tires which can be seen in the pictures have 3k
miles on them as well. Carfax is clean and car has never been smoked in and is as clean as it was on the showroom.
Car has all the major options such as moonroof, entertainment package in the rear, 8 or cameras all around vehicle,
etc.... I can scan the sticker if need be as she was ~120k new only two years ago. Obviously if you are interested
in this awesome sedan you know the features and how wonderful the car looks and how much power this car delivers.

When you bring your car to a dealer, you expect a technician to take it out for a spin, just to make sure there aren't any noises, rattles or other behavior that you may have missed. Maybe they run a few miles along a predetermined test route or take a quick run down the highway. You do not, however, expect a tech to abscond with you vehicle for a full weekend
That is just what happened to Chris Jackson, though, an Audi S4 owner in Calgary. His car was taken to Glenmore Audi - as mandated in his lease agreement - due to an issue with the navigation system. After realizing he'd left something in the car, he swung by the dealer on Saturday to pick it up, only to discover the car wasn't on the dealer's lot.
Naturally, he approached the dealer about the missing sedan.

Loïc Duval, Tom Kristensen and Allan McNish took the No. 2 Audi R18 E-Tron Quattro to victory at this weekend's Six Hours of Austin at the Circuit of the Americas, marking the 12th victory for the R18 body and the 100th LMP overall victory for Audi since 2000. The milestone victory also saw a second R18, driven by Marcel Fässler, André Lotterer and Benoît Tréluyer, take third place.
Audi's LMP boss, Chris Reinke pointed out the poignancy of snagging the brand's 100th victory in the US, saying, "For Audi, it's a very special result because it was the 100th victory in LMP racing. We celebrated the first victory int he USA as well, in 2000. What could be sweeter than achieving this milestone here?" It wasn't all easy going, though, as the team was racing at COTA for the first time, and the No. 1 car had more than a few difficulties.
This victory marked the 12th for the R18 since it started racing in 2011. For comparison, the R15 TDI only managed three victories between 2009 and 2011, and the R10 TDI took 22 wins between 2006 and 2008. Those cars are overshadowed by the original Audi R8 racecar, which won 63 races between 2000 and 2006. Take a look below for the full press release from Audi, and additional quotes from team members.