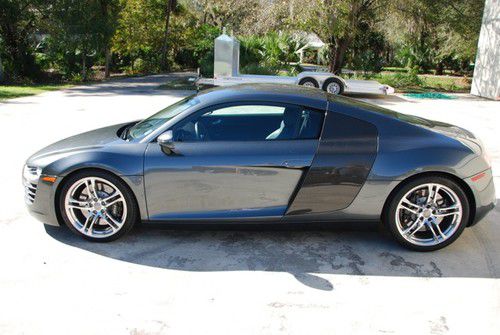 2009 Audi R8 Coupe Quattro MT6 that I have owned since new. The car has been maintained by Breaman Automotive in West Palm Beach, FL. The car is in perfect condition inside and out. Any questions please feel free to email me.

After salivating over the Audi RS6 Avant last night, we're happy to see yet another RS-branded Audi here on the show floor at the Geneva Motor Show. Meet the RS Q3, Audi's first ever high-performance crossover, showing what's possible when the Ingolstadt automaker brings its best sporting bits to its smallest CUV.
Powering the RS Q3 is Audi's 2.5-liter turbocharged five-cylinder engine - the same one found in sweetie-darlings like the TT RS and RS3. Output is rated at 310 horsepower and 309 pound-feet of torque, sent to all four wheels via the automaker's seven-speed S-tronic dual-clutch transmission. Weighing in at just over 3,800 pounds, the RS Q3 is indeed a porky little pig, but no matter - that forced-induction fire will propel the small crossover to 62 miles per hour in five and a half seconds. And that's with launch control, too.
The RS Q3 certainly looks the part of a proper sporty Audi, with exaggerated air vents and bulgy, aggressive bits all around. Honestly, we like the way the RS package has translated to the Q3 form - this design really works well on the smaller CUV package. Inside, performance-minded fittings like a flat-bottomed steering wheel, upgraded gauges and sport seats bring the whole RS pack full circle. We'll admit, we're definitely intrigued by this little guy.