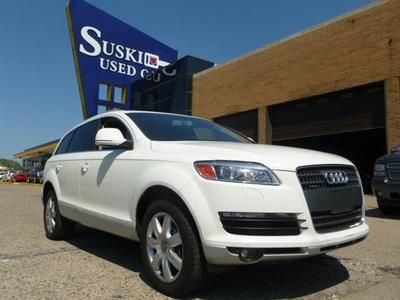 Audi officially unveiled the A3 Sportback E-Tron at the 2013 Geneva Motor Show. While not a production model, the plug-in hybrid gives us a good glimpse at what the German automaker has in store for future products. The five-door gets around thanks to parallel hybrid drivetrain comprised of a turbocharged 1.4-liter four-cylinder engine and a small electric motor integrated into the vehicle's six-speed dual-clutch transmission. While the four-cylinder churns up 150 horsepower and 184 pound-feet of torque, the motor contributes 100 horsepower and 242 lb-ft of twist. All told, the design allows the E-Tron to serve up its full power from just 1,750 rpm.
An 8.8-kWh lithium-ion battery sits under the floor beneath the rear seat, complete with a liquid cooling system designed to keep the pack in its optimum temperature range. The A3 Sportback E-Tron can be charged in as little as 2.5 hours with a 3.6-kW charger, yielding an EV range of up to 31 miles. The machine can also travel using the electric motor, ICE or a combination of the two for a total range of 584 miles. Check out the full press release below.

Audi is planning a whole raft of new models for the near future, and now we have further insight into what at least some of those models might be. The German automaker has reportedly filed trademarks for a series of model names, including SQ2, SQ4, Q9 and F-Tron.
Following in the footsteps of the SQ5 performance crossover, the SQ2 and SQ4 nameplates would seem to indicate that Audi is planning performance versions of its upcoming compact crossovers. The Q9 would suggest that a larger crossover is in the works to slot in above the already gargantuan Q7. And the F-Tron name could be used for a fuel-cell version of the A7 or other models, following a similar naming pattern to the e-tron range of electric vehicles.
Of course Audi could simply be filing these trademarks as a safeguard and may not actually build any of these models. But one way or another, it indicates a certain measure of intent exists as Ingolstadt gears up to expand its lineup with 11 new models in the next few years.