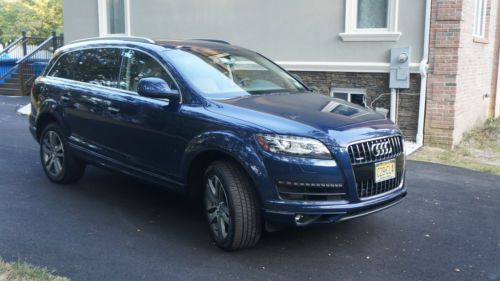 Minutes after spending time in the refreshed 2016 Audi A6 in Germany, we were tossed the keys to its enthusiast-tuned sibling, the Audi S6. In similar manner to its lesser brethren, the S6 has also been updated for the 2016 model year with a new look, a boost in power and additional technology.
Its aggressive demeanor is heralded by a redesigned signature single-frame grille, resculpted bumpers (front and rear) and new lights on both ends - the Matrix LED headlamps fitted to our European test car are impressive, but the US DOT has ensure that we won't see them (pun intended) for now. The cabin appointments have gone even further upscale, and the enhanced MMI infotainment system now runs more fluidly thanks to a faster NVIDIA graphics chip. The primary instrument cluster, facing the operator, has been redesigned to offer its own duplicate display to ease the driver's workload.
Under the hood, the twin-turbocharged 4.0-liter TFSI V8 is bumped to 450 horsepower (a gain of 30), while torque remains the same at 406 pound-feet. The standard gearbox is Audi's seven-speed S-tronic dual-clutch unit, sending power to all four wheels through the automaker's rear-biased Quattro permanent all-wheel-drive system.