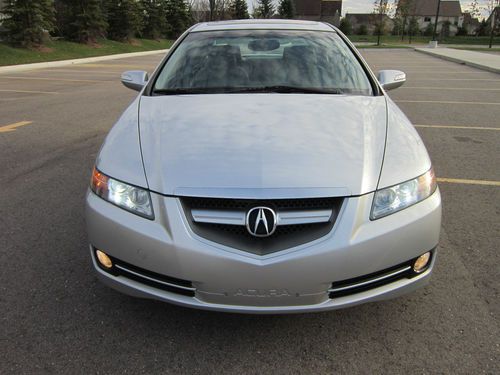 ONE OF THE BEST CARS IN THE LUXURY MODELS, THIS 2008 ACURA TL COMES WITH VERY SHARP AND CLEAN LOOKS AND DRIVING PERFORMANCE. IT HAS A CLEAR TITLE AND HAD NO ACCIDENTS BEFORE ALSO A NON SMOKER AND NON PET VEHICLE. MOST OF THE MILES DRIVEN HIGHWAY. NO ISSUES NO STORIES JUST A CLEAN VEHICLE. NEW TIRES INSTALLED LESS THAN 10 THOUSAND MILES DRIVEN. VEHICLE COMES LOADED WITH OPTIONS LIKE:
- HEATED LEATHER SEATS
- 17 INCH ALLOY WHEELS
- XENON HID HEADLIGHTS
- POWER SUNROOF
- CONTROLS ON THE STEERING WHEEL
- FOG LAMPS
- KEY LESS ENTRY
- POWER WINDOWS, MIRRORS, SEATS, LOCKS
- AM/FM/CD,CASSETTE,AUX
THIS IS A NO RESERVE AUCTION, PLEASE MAKE SURE FUNDS ARE READY BEFORE BIDDING.
ANY VEHICLE INSPECTIONS MUST BE DONE BEFORE AUCTION CLOSES, IF ANY OFFERS THEN PLEASE CONTACT US.
WE CAN PROVIDE BETTER SHIPPING RATES TO GET THE CAR DELIVERED TO YOUR DOOR.
THIS CAR WAS A LOCAL TRADE IN SO WE DO HAVE THE ORIGINAL TITLE FROM THE SELLER AND IS SOLD AS PRIVATE SALE. NO DEALER DOC OR ANY OTHER FEES.
PLEASE CONTACT US FOR ANY FURTHER QUESTIONS OR CONCERNS @ 734-747-0847.
THANK YOU!