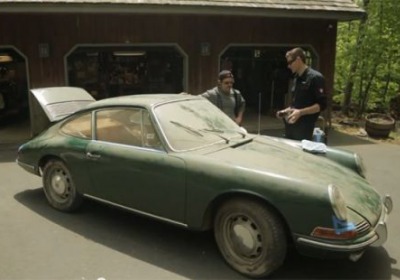 Larry Kosilla, the founder of the Ammo NYC line of car cleaning products, has his own show YouTube's Drive network – we saw his work before when he gave a Ferrari 288 GTO a two-day detailing job. On this episode, Kosilla gets called in to do his best with a 1966 Porsche 912, a car that was last registered in 1990 and recently found in a barn in Connecticut.

Among the expected dirt and cobwebs, the Irish Green Porsche is also covered what is assumed to be cat fur and "waste." The car is in such delicate condition, however, that Kosilla can't wash it for fear of getting more water in it than on it, so he has to steam and wipe the entire thing down before he begins the paint correction process. In addition to the thorough knowledge of his work and his ability to explain it simply, the episode is captioned with further information one of Porsche's popular but less regarded models, and how Kosilla does what he does.


You'll find a compelling 29 minute masterclass in the video below.