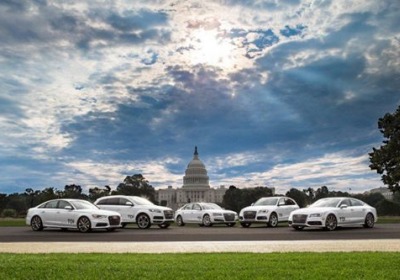 Volkswagen Group of America has lit oil-burning fireworks to celebrate the sales of more than 100,000 TDI Clean Diesel vehicles in the US between its VW and Audi brands this year. According to VW, that means it is responsible for more than 75 percent of diesel-engined cars and SUVs sold here – perhaps not surprising when the two brands offer a total of 12 diesel models.

What might be surprising is that the number of diesels isn't far off the estimated sales of 90,000 battery electric vehicles and PHEVs, with 15,000 of those accounted for by the Tesla Model S, another 12,000 or so being the Toyota Prius PHEV.

VW's keen to play up the ease of making diesel part of your life, stressing that it doesn't need any change to the refueling infrastructure and that "this is a technology delivering real answers to society's concerns about fuel consumption and greenhouse gas emissions without compromises."

You can read more about the good news and diesel's good deeds in the press release below.

IT'S OFFICIAL: Volkswagen Group of America has sold more than 100,000 TDI® Clean Diesel vehicles in 2013

"The past year has shown that American consumers clearly recognize the benefits of clean diesel TDI vehicles," said Scott Keogh, President, Audi of America. "They understand now more than ever that this is a technology delivering real answers to society's concerns about fuel consumption and greenhouse gas emissions without compromises."

More than 75 percent of the diesel engines sold in the passenger car and SUV segments in the United States can be found under the hoods of Volkswagen and Audi models. Ever since 1977, when Volkswagen first offered a diesel in the Rabbit, the company has sold more than one million cars and SUVs powered by these engines in this market. High-mileage, TDI® Clean Diesel Volkswagen models accounted for 21 percent of sales in November and 24 percent of sales year-to-date, the best year-to-date results on record.

In 2013, Audi showed it intends to remain at the forefront of clean diesel expansion in the U.S. by dramatically enhancing its lineup with the new Audi Q5 TDI, A6 TDI, A7 TDI and A8 TDI models. Those premium models joined the Audi Q7 SUV in the market, and next summer Audi will introduce its most fuel-efficient model, the all-new A3 TDI sedan.

The TDI models in the Audi and Volkswagen lineup deliver up to 30% better fuel economy and 12%-30% lower carbon dioxide emissions than gasoline engines and there is no need for driver behavior change except to move from one pump to the other and no need for big infrastructure changes.

Volkswagen offers Clean Diesel technology in seven different models, six of which get an EPA estimated fuel economy rating of 40 mpg or more on the highway. The models include the Beetle, Beetle Convertible, Golf, Jetta, Jetta SportWagen, Passat and Touareg.

About Volkswagen Group of America, Inc.
Volkswagen Group of America, Inc. (VWGoA) is a wholly owned subsidiary of Volkswagen AG, one of the world's leading automobile manufacturers and the largest carmaker in Europe. VWGoA operates a manufacturing plant in Chattanooga, Tennessee and houses the U.S. operations of a worldwide family of distinguished and exciting brands including Audi, Bentley, Bugatti, Lamborghini and Volkswagen, as well as VW Credit, Inc. Founded in 1955, the company's headquarters are in Herndon, Va. VWGoA brings vehicles to the U.S. that marry the science of engineering and the art of styling, with the goal of offering attractive, safe, and eco-conscious automobiles that are competitive and set world standards in their respective classes. The company has approximately 5,900 employees in the United States and sells its vehicles through a 950-strong dealer network.