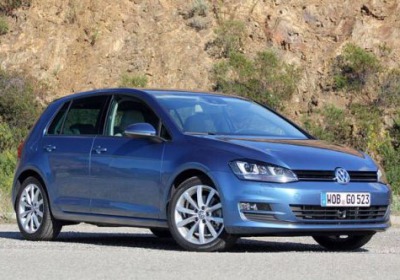 As the top market for the Volkswagen Group, China will be getting plenty of attention in coming years when it comes to vehicle production starting with an all-new plant in Foshan. The new plant celebrated the production of its first car this week – a seventh-gen Volkswagen Golf – but the Audi A3 will also join the line by the end of this year.

With its Foshan plant, Volkswagen is adding 6,500 workers in China as well as 300,000 units of production capacity – a figure that will eventually double. In addition to this growth, by 2018, VW is also planning to boost its workforce from 75,000 to 100,000 in China, an increase that will help rocket production capacity from the current 2.6 million annual units to more than 4 million.

-Prof. Dr. Heizmann: "The Volkswagen Group has been a reliable partner and motor of technologically sustainable development in the Chinese automotive industry for three decades."
-First-stage production capacity of 300,000 vehicles
-Foshan plant is the Group's 104th location worldwide and is to build Volkswagen and Audi models
-6,500 skilled jobs for Southern China

The Volkswagen Group and its joint venture FAW-Volkswagen today inaugurated the new vehicle production plant in Foshan, Southern China. In just under two years, the Group has constructed a highly-advanced, resource-efficient car manufacturing facility at the new location in Guangdong province. First-stage production capacity is 300,000 vehicles per year. It is planned to double capacity in the medium term. The first vehicle to leave the assembly line in Foshan is a seventh-generation Volkswagen Golf.

"Volkswagen in China stands for both green mobility and sustainable growth. Our new plant in Foshan combines state-of-the-art technology with particularly efficient resource management," Prof. Dr. Jochem Heizmann, Member of the Board of Management of Volkswagen AG and President and CEO of Volkswagen Group China, said, and added: "This new plant creates 6,500 skilled jobs and will systematically foster new talent. We are thus laying the foundations for an innovative and sustainable automotive industry in Southern China."

The Foshan facility was the first car factory in China to receive a Triple-Star Green Building Award, the highest state award available for environmentally compatible factory design. 100 percent of the plant's wastewater is treated and reused, almost 90 percent of the waste and packaging material from the production process is recycled. Like all Volkswagen plants in China, Foshan has been certified to the ISO 14001 standard. The new factory ranks as one of the most environmentally-friendly car manufacturing plants in China.

First-stage production capacity at the FAW-Volkswagen plant is 300,000 vehicles per year. Production began today with the Volkswagen Golf. The Audi A3 will also be built in Foshan from the end of 2013. The Foshan plant is the first production facility in China based on the modular transverse toolkit (MQB) and can simultaneously build Volkswagen and Audi models. It is planned to double capacity at the plant in the medium term.

China is the Volkswagen Group's largest sales market worldwide. In 2012, the company delivered more than 2.81 million vehicles to customers in the country. In the first eight months of this year, deliveries rose by 17.9 percent compared with the comparable prior-year period to 2.05 million vehicles.

FAW-Volkswagen already operates two vehicle production plants, one in Changchun and one in Chengdu. The Volkswagen Group is building four further plants in China this year and over the next few years. By 2018, the number of employees will have increased from the present 75,000 to 100,000, and annual production capacity will have risen from around 2.6 million to over four million.