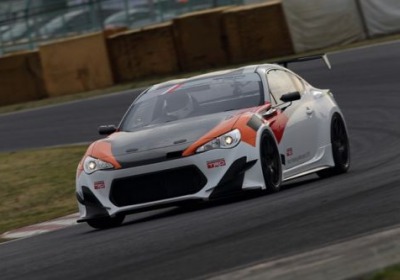 In the midst of the 2013 Goodwood Festival of Speed, there's a particularly special Toyota running up the hill. This special entry is a GT86 (the cousin to our Scion FR-S and Subaru BRZ) that's been poked, prodded, and tweaked by the minds at Toyota Racing Development. The result of TRD's fettling is a nearly race-ready car.

Starting with the body, the hood, doors, trunk lid, and wings are all made of carbon fiber. The lightweight treatment doesn't end there, though. The bumpers, fenders, and diffuser all feature carbon-fiber-reinforced plastic, while the windows are now made of polycarbonate plastic.

Under the hood sits the same 2.0-liter boxer engine found in the standard GT86, but its six-speed manual gearbox features a shorter final drive ratio for improved acceleration. The coilover suspension has been firmed up, and a TRD mechanical limited-slip differential replaces the Torsen unit. The TRD Griffon rides on TWS 18-inch wheels and Yokohama Advan tires. To bring proceedings to a stop, TRD has fitted its own mono-block caliper kit, complete with more robust racing pads.

To see what all that looks like on the move, Toyota has produced a rather stylish video.


One year on from launching the Toyota GT86 at the Festival of Speed, Toyota returns to Goodwood to give crowds first sight of a pure-bred racing version of its multi-award winning sports coupe. The TRD Griffon Project, created by Toyota Racing Developments, will be making its first UK appearance at the popular event, following its unveiling at this year's Tokyo Auto Salon – Japan's premier customisation show.

The TRD Griffon Project is a development of the GT86 designed specifically for track driving. Modifications have been made throughout the car to reduce weight, strengthen the chassis and introduce racing-specification TRD accessories.

The overall body shape follows the same low, muscular lines of the original coupe, but with the bonnet, roof, doors, boot lid and rear wings made from lightweight carbon fibre. Further weight is saved by using carbonfibre reinforced plastic – CFRP – for the bumpers, wider front wings and rear diffuser. All the windows are made from polycarbonate material instead of glass.

The cabin is fitted with a TRD driver's bucket seat, gear shift knob, ignition button and oil pressure and water temperature gauges. There is also a Momo steering wheel and Takata seatbelts.

Many of the car's components have been strengthened or upgraded: the standard Torsen limited-slip differential has been replaced by a TRD mechanical LSD and the suspension has been significantly reinforced. Coil over suspension kit is used and the final gear ratio has been shortened to 4.8:1.

Further performance-related changes include an oil cooler for the engine and a TRD mono block brake calliper kit with racing spec brake pads. The TRD Griffon Project runs on TWS 18-inch wheels with Yokohama Advan tyres. The 2.0-litre, normally aspirated "boxer" engine that characterises the GT86 retains the same specification as in the road-going car.

UK customers can also enjoy the benefit of authentic TRD parts on their road-going GT86. The GT86 TRD is a limited edition version of the standard car that gains a series of genuine styling and performance accessories, including 18-inch alloys, front and side skirts, a rear spoiler, fast-response quad-exhaust and TRD-branded detailing on the filler cap, gear knob and radiator cap.