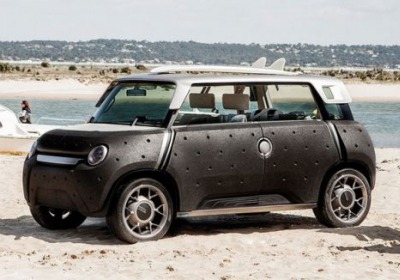 Not to be outdone by the Renault Twin'Z concept penned by Welsh designer Ross Lovegrove, Toyota has partnered up with French designer Jean-Marie Massaud to create the 2013 Toyota Me.We Concept. Unveiled at Le Rendez-vous Toyota in Paris, the Me.We Concept is an attempt to imagine a car that can be appreciated by owners across a wide variety of lifestyles while being courteous to the environment, too.

From a "Me" perspective, the concept is highly customizable with removable body panels, and even though it might look like just a small hatchback from the outside, Toyota claims it can also be used as a pickup (with an extendable rear panel), a convertible (with a neoprene roof panel) and even an off-road vehicle. As for the "We" part of the car, it's a fully electric vehicle with individual in-wheel motors and a battery pack mounted under the load floor. The concept has a weight of around 1,600 pounds kept low thanks to an aluminum chassis, but it also features renewable bamboo wood for the floor in addition to the fully recyclable polypropylene exterior body panels. Scroll down to see more in an official video and to check out Toyota's official press release.

Working with Toyota since 2011, Massaud has sought to create an "anti-crisis" car that addresses contemporary human, economic and environmental challenges, bringing his independent vision and experience from outside the motor industry.

The thinking behind the concept

Massaud and Toyota defined three primary aims for the concept: -

Pertinence – their vision for the car is passionate but considered. The concept should be adaptable to a wide variety of lifestyles as well as displaying high quality and innovation.

Synthesis – a move away from motor industry tradition to remove excess and suggest a new way of responding to people's behaviour and expectations. The concept should propose an alternative synthesis based on personal choices about vehicle architecture, lower running costs and the way the vehicle will be used.

Modernity – challenge conventions and seek change in designing a car that goes beyond just looking good through the experience it offers, its intelligent solutions and its ability to exceed the needs of the owner. This should be a car that reflects the values of forward-thinking people rather than simply their social status.

ED2 and Massaud combined their expertise to produce a car that reflects a quest for change in personal mobility. While cars have increasingly become subject to restrictions, they have put road users – drivers and pedestrians – at the heart of their thinking. The focus is on the desire for freedom, pleasure, emotion and the ability to travel free from constraints, while at the same time addressing people's sense of personal responsibility and commitment to good citizenship.

The result is car that takes a modern, global view of travel and forms part of a wider view on how to adapt to the environmental challenges that will shape the future of personal mobility. It is a no-extras package, conceived as an "anti-excess" vehicle. In short, the Toyota ME.WE represents the transition from the culture of "more" to the culture of "better".

ME.WE seeks to resolve a number of real-life contradictions, not through reinvention of what a car is, but by taking a different approach that is simpler, more appropriate and realistic – an alternative to cars that are about "passion and status". The goal was do more and create better while using less. By reducing the pool of resources and constraints, it was possible to increase capability, quality and pleasure.

Light and resilient: ME.WE has a tubular aluminium structure, on to which light and hard-wearing polypropylene panels are fitted.

Individual and standard: the moulded panels are made using a cost-efficient standard production system, but they are easy to personalise.

Freedom and responsibility: ME.WE is a pick-up, convertible, off-roader and small city car in one. It appeals to a wide range of users, and has a small eco-footprint thanks to its light weight and the materials used in its construction.


ME and WE: the concept's name expresses its simultaneous concern for personal well-being (ME) and that of others (WE).

ME.WE is electric-powered, using the same in-wheel motors as the Toyota i-ROAD, with batteries located under the floor, as in the iQ EV. With none of the traditional packaging restraints associated with conventional powertrains, the entire interior could be devoted to the vehicle's occupants and luggage.

The lightweight construction using aluminium and polypropylene panels helps keep the car's weight down to a target 750kg, about 20 per cent less than a conventional steel-built supermini. The body panels, which are 100 per cent recyclable, weight just 14kg.

Bamboo is used in the construction of the floor and for the cabin's horizontal surfaces, chosen both for being a renewable resource and aesthetically pleasing. ME.WE is easy to keep clean with a simple wash, inside and out.

ME.WE is an intelligent response to the ecological threats posed by mass production and the increasing number of cars on the world's roads, as it is made from materials that help reduce the energy it consumes and the CO2 and harmful emissions it produces.

The simplicity of its design is matched by it ease of use. The in-wheel motor system means it can be operated in two or four-wheel drive, allowing it to tackle rougher terrain than a traditional car, and without the weight penalty of a 4×4 transmission system.

In the cabin priority is given to driver and passengers, so luggage can be carried on the roof beneath a fold-out, weatherproof neoprene cover. However, the rear luggage space can be extended into a platform like that found in a pick-up.

The rear bench seat is mounted on floor rails and when not in use can be folded and stored beneath the front seat. It can also be removed altogether and even used for ad-hoc picnic seating.

The simplicity of the design is also evident in the instrumentation, which comprises a single screen above the steering wheel which displays vehicle speed, battery charge, journey information and navigation instructions, delivered via a smartphone. The phone itself is mounted below the screen so the driver can personalise the cabin environment with music and other apps, as well as controlling on-board temperature.

The heating and air conditioning are delivered by a low-energy air pump and electric seat heaters to minimise power consumption. And to achieve a cabriolet-like open air feel, all the windows can be opened, even the windscreen.