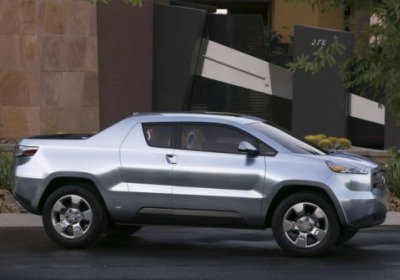 Not all so-called Memorandum of Understanding pacts end in actual collaborations. For instance, after a two-year "feasibility study," Toyota and Ford have just announced that they will not be developing hybrid systems for use in light trucks and SUVs as previously planned, and the two automakers will instead continue to develop their own hybrid technology independently.

The would-be collaboration was first announced in August of 2011, and would have seen a rear-wheel-drive hybrid platform that would "improve the efficiency of trucks and SUVs while still allowing them to be driven in the way customers expect," according to our initial post on the topic.

Keep in mind that this announcement isn't to say we shouldn't expect hybrid pickups and SUVs from the two automakers, but that they probably aren't coming very soon – Ford says it will have a system "before the end of this decade" and we haven't heard much from Toyota on the hybrid truck front since the 2008 A-BAT Concept (pictured above) – and that they will not share any components between them (and they never have, for what it's worth).

In any case, Ford and Toyota are continuing to work together on "next-generation standards for telematics and will consider other areas for future collaboration as well." Feel free to read announcements from both automakers below.

Rear-wheel-drive hybrid for trucks and SUVs on track

The new hybrid system – which will be available by the end of this decade – will be based on an all-new architecture to deliver the capability truck and SUV customers demand while providing greater fuel economy.


"We know what it takes to build world-class hybrids, and we now will build and leverage that expertise in-house," said Raj Nair, group vice president, global product development. "By continuing to develop a rear-wheel-drive hybrid system on our own, we can extend our advanced hybrid technologies to new vehicle segments and deliver even better fuel economy across our lineup."

While collaboration on the rear-wheel-drive hybrid has concluded, Ford and Toyota will continue to work together on development of next-generation standards for in-car telematics, back-end support systems for call centers and Internet-based services – all designed to bring more Internet-based information to consumers globally.

Toyota and Ford have completed their feasibility study for collaboration on the development of a new hybrid system for light trucks and SUVs, which was first announced in August of 2011. As a result, we have agreed to develop hybrid systems individually. Toyota and Ford continue to evaluate the feasibility of working together on next-generation standards for telematics and will consider other areas for future collaboration as well.

Toyota's commitment to hybrid technology is unwavering. We have sold over two million Toyota and Lexus hybrid vehicles in the U.S., representing 70 percent of the U.S. auto industry's total hybrid sales, and over 5 million hybrids worldwide. In addition, Toyota remains on track to offer 18 new or redesigned hybrid models globally by the end of 2015.

All told, Toyota estimates that its global fleet of nearly 20 hybrid vehicles (12 available in the United States) has resulted in approximately 34 million fewer tons of CO2 emissions than those emitted by gasoline-powered vehicles, and have saved their owners more than 3 billion gallons of gasoline.