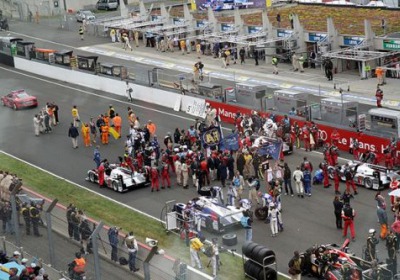 The 2013, 90th anniversary edition of the 24 Hours of Le Mans has begun, tragedy marking the opening laps with the death of Allan Simonsen. We're at the track now as a guest of Audi and plan to stay through the evening, and even we haven't been able to find out what caused the accident – the only video is from just after the incident, and beyond the statement from ACO there's been no more news. The Aston Martin in the LM GTE Am class and its all-Danish drivers had taken pole in its class and was one of the favorites to win.

The pre-race report will come first, and even thought we can't spoil the race because we're only five hours into it at the time of writing, we'll put all of the news at the end in case you don't even want the updates.

Or you can go straight to the high-res galleries above.

Audi's pre-race press conference was a little bit of talk about the new car and a lot of thinly veiled chastisements to the ACO about how the organizing body has been changing the rules to slow down the Audis at the behest of Toyota. Among several comments thanking the ACO for its commitment to the beneficial future of the sport, the moderator said things like "We don't know if the WEC would exist if not for the commitment of Audi and Volkswagen," and race chief Wolfgang Ullrich had the ACO president on stage where he delivered the same kinds of messages in person, as he handed over the 2012 World Endurance Championship series-winning R18 to the ACO museum.

The ACO changes the regulations to ensure Balance of Performance (BoP). They have been tweaked consistently as competitors tried to find a way to beat Audi on and off the track – things were especially contentious when Peugeot was running. Toyota didn't win Le Mans last year but won the four races to close out last year. Still, when this year's regulations were written, Audi's R18 E-tron Quattro was further limited with a smaller air restrictor. After the first two races of this year – which is when the BoP regulations can be altered – Toyota not only didn't win a race, but the first Toyotas in both races finished a lap down. Toyota's sole 2013 car, run at the second race, only made it about half the race's total distance before retiring. Toyota said the BoP "significantly favored Audi," and the ACO changed the rules to allow gasoline-powered cars to three more liters of fuel and shrunk the size of the air restrictor on the Audi. Ullrich, normally quiet in such situations, asked, "How can someone come to the first race without their new car and then bring one to the second race and complete only half the race and ask for a change in the BoP?" he said.

The result now is that Toyota can do one more lap than Audi before it has to pit. Remember, everyone says the key to winning at Le Mans is staying on track. Over the 24-hour period, Audi says that Toyota can save itself three pit stops compared to the Audi. In order to make up the deficit, Ullrich says the R18 E-tron Quattro has to be 0.5-second quicker per lap than Toyota.

Audi folks are unhappy. We spoke to the man who develops the R18 E-tron Quattro's engine, and his agitation was evident as soon as he began to talk about the work done to restore performance – but all they could do was change the mapping since the change was made so late. Another example he gave of ACO capriciousness was when, last year, Audi asked the ACO if the body would allow a compressed-air hybrid, which is technology Audi wants to work on for its road cars. The ACO said yes. Then at the beginning of this year, after months of work, the ACO told Audi they wouldn't allow it. According to the engineer, the ACO told Audi, "We made a mistake." The problem is that "This represents millions in development," he said – millions that are lost in incidents like this. "Le Mans is about technology, and if we can't practice here what we want to do with our road cars, it makes no sense for us."

Audi has taken the first three positions for the third year in a row. Car No. 2 was first on the grid, driven by Loïc Duval, Tom Kristensen and Allan McNish. Duval, who Kristensen called one of the fastest drivers of his generation, set the lap time but had two laps of clear traffic to do it, something that almost never happens at Le Mans. The Audi in second place is car No. 1 driven by André Lotterer, Marcel Fässler and Benoit Tréluyer, the team that's won the last two editions of the race. Lotterer set the lap time and the rumor was that he was sand-bagging; he leaves a little in reserve then turns it on during the race. Car No. 3 is Lucas di Grassi, Oliver Jarvis and Marc Gene.

The monococque in the R18 E-tron Quattro weighs half that of the one from the R8R Audi ran in 1999, the first time it came to Le Mans. Fuel consumption dropped by ten percent from 2000 to 2010 (and over the switch from gasoline to diesel) even as top speeds went up from 208 to 225 miles per hour.

Toyota has places four and five, followed by the privateers at Rebellion Racing. The Rebellion R-One was designed, developed and built by Oreca, the sports car manufacturer that has a number of other cars in the race, and uses Toyota engines. (Oreca is actually an acronym, it stands for Organisation, Exploitation Competition Automobile. They assisted Mazda with the 787B that won in 1991, the Dodge Vipers that took GT victories in 1998, 1999 and 2000, and the Peugeot 908 HDi FAP. They are helping Toyota Racing this year with "operational support" for the TS030.)


In LMP2 Morgan took pole; Aston Martin took the top spots in both LM GTE Pro and LM GTE Am.

Patrick Dempsey heads the Dempsey-Del Piero-Proton team, his co-drivers Joe Foster and Patrick Long in the No. 77 Porsche 911 GT3 RSR. It's the second time Dempsey's been a driver, his first time in 2009 when he drove a Ferrari F430.

The rumor we heard about Porsche's 2014 Le Mans entry is that it will be a hybrid, with a twin-turbo V6 mentioned to be at the heart of it. Porsche hasn't given anything away, though, saying only that they're doing everything in-house. And speaking of homes, Audi has billboards all over the Circuit de la Sarthe that say "Le Mans. Home of quattro." Porsche has put up its own billboards, some in front of the Audi pits, that say "Home is where the heart is."

Before the race we checked out the the 11 cars "that have written the history of the race" since 1923, parked on the slope up to the Dunlop Bridge.

Two women are driving in the race, Keiko Ihara and Natasha Gachnang.

THE RACE REPORT EIGHT HOURS IN:
The weather has been dry, then rainy, the spitting, then back through the cycle. The Audis have suffered the kinds of technical gremlins we aren't used to seeing from them, which is the only thing that has kept the lead Toyota in the game. It's being speculated that Audi No. 3 is set up differently than the other two, using a blown diffuser. The Corvettes are having a rough time of it. Only two cars have officially retired.

Kristensen leads in the No. 2 Audi, driving his first stint. He's followed by the second No. 8 Toyota driven by Stephane Sarrazin, the No. 7 Toyota driven by Kazuki Nakajima. Audi No. 3 had dropped to fourth but was in the garage again with technical issues, and was just released, behind the safety car, driven by Lucas di Grassi, apparently still in fourth but two laps down. The No. 13 Rebellion is in fifth, three laps down.

GTE Pro is a three-way fight at the lead, the triplets bunched up after the hour-long safety car session at the beginning of the race. Bruno Senna in the No. 99 Aston Martin leads the No. 97 Aston Martin driven by Pete Dumbreck and the No. 92 Porsche driven by Richard Lietz.