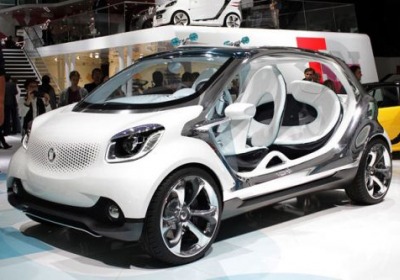 We've been waiting... and waiting... and waiting... for something new from Smart. Not another special edition of the Fortwo – even one with wings – can slake the brand's need for some fresh iron. Spy shots tell us that a couple of new models are on the way, but for now, we have this Smart Fourjoy concept, a buggy-like showcar that's said to preview the next-generation Forfour. Of course, unlike this concept, the production four-seater will come with full bodywork, but you're probably looking at a thinly veiled take on the the 2015 model's face and general proportions.

And while the production Forfour figures to come to market with gas and perhaps diesel offerings overseas, the Fourjoy borrows its motivation from the Fortwo Electric Drive – meaning a 55-kW electric motor backed by a 17.6-kWh lithium ion battery pack. We wouldn't be surprised if the next Forfour eventually gets a production EV model, but we wouldn't look for that at launch.

We're fine with all of this production-minded stuff, of course, but there's still something intriguing about the concept seen here. The Fourjoy sparks a latent curiosity within us that longs to see a fun-minded open-air beachmobile offered by a major automaker – something like a Fiat 500 Jolly or a Volkswagen Thing. Indeed, VW has been making noise about producing its Up! Buggy, but even if it doesn't, perhaps the company bold enough to produce the Smart ForJeremy will take a chance on getting some sand between its toes – provided it can negotiate crash testing.

If you're looking for more information on the concept, scroll down to check out a video and see the official press release.

Stuttgart/Frankfurt. More than two seats are also fully in keeping with the smart brand experience: the smart fourjoy proves this. The study has all the typical smart attributes and embodies pure carefree enjoyment of urban life. The compact four-seater is the forerunner of a new smart generation and is celebrating its world premiere at the International Motor Show in Frankfurt (12 – 22 September 2013).

No doors, no rear window and an open roof – the smart fourjoy dispenses with unnecessary ballast. At the same time this gives viewers an unhindered view of the futuristic interior with its striking rear seat bench in the style of lounge furniture. This means that the vehicle has ample space for four people.

With its compact dimensions (length/width/height: 3494/1978/1494 millimetres) and a turning circle of 9.1 metres the smart fourjoy boasts the agility typical of the brand and is able to show off its strengths, especially in cities around the world. And thanks to the state-of-the-art electric drive with a 55 kW magneto-electric motor the zero-local-emission smart fourjoy offers agile driving performance without any shift delays.

What's more, the four-seater has inherited many of the genes of the original smart. "The smart fourjoy is the perfect icon of our smart design philosophy that is being carried into a new era. For the first time we are showing the future sporty four-seater character of the new smart family," says Gorden Wagener, Head of Design at Daimler AG. "The typical smart silhouette, the clear lines and styling and also the further development of the smart face make this study a modern design icon."

Numerous design elements are a reference to the first smart model series. These include the extremely short overhangs, the wheels positioned on the four most outer points, the tail lights integrated in the sturdy tridion cell and the spherical instrument cluster.

Dr Annette Winkler, Head of smart, says: "The smart fourjoy is a study that successfully translates the unique design and the urban driving fun of the smart fortwo to an extremely compact four-seater. Numerous details of previous show cars that received very positive feedback have been incorporated in the fourjoy. The exterior proportions already reveal a lot about the appearance of our four-seater production smart which will be launched at the end of 2014 and will also enable families to travel together in a smart."

The study shows that smart is becoming more grown-up. The deliberately three-dimensional, upright front gives it a very expressive appearance that greets the viewer with a fresh smile that is both friendly and assertive. The smart fourjoy proudly displays the large brand emblem on the front grille. The honeycomb structure of the air inlets on the front and the convex and sensuously shaped body surfaces emphasise the family relationship to the studies smart for-us (Detroit 2012) and smart forstars (Paris 2012).

The extremely pronounced tridion cell is a new feature. On the study it is made of polished full-aluminium and its brilliant bright lustre finish emphasises the premium character of the brand.


The raised smart lettering milled from aluminium on the side skirts is a further sign of the top quality. The pearlescent white on the bumpers, front bonnet and tailgate provides a contrast to the aluminium of the tridion cell. The door mirrors "float" on an aluminium stele.

A look back to the future: as with the first-generation smart fortwo the rear lights are integrated in the tridion cell. Like turbines, cubes have been incorporated into the plexiglass there. The headlamps do not have a glass cover and this reinforces the three-dimensional impression of the U-shaped daytime running lights. LEDs are exclusively fitted in the front and tail lights.

Transparent petroleum-coloured moulded parts emphasise the upbeat character of the study. They are found in the wind deflector at the top of the front windscreen, on the A-pillars on the sides and on the rear roof spoiler. The function and colour are reminiscent of 1990s tennis caps.

Without doors, a rear window or roof panel the smart fourjoy really brings the city inside. Elements that connect the exterior and the interior are the handles for driver and passenger on the side sills and the openings in the roof structure.

The most striking interior features are the two futuristic-looking front seats and the rear seat bench with a similar design. With their organic, sculptural shape they are reminiscent of modern lounge furniture.

The seat shell has a harmonious design. The rear of the seats is made of dark chrome. A piping-like line winds around the sides of the seats with the same petroleum colour as the plexiglass accents on the exterior. Perforated and smooth surfaces alternate on the vehicle floor. As the floor is dark the seats seem to float.

The seats and the instrument panel are supported by a continuous central structure. It features a convex surface with touch-sensitive operating functions.

The instrument panel gives the impression of depth, and with a honeycomb structure and fading it takes up two themes of the exterior. The solid instrument panel support is made of transparent, illuminated plexiglass into which apertures have been milled. The striking multidimensional honeycomb structure was created by moulding on white plastic with a pearlescent effect in these areas.

The design of the spherical instrument cluster and the single-spoke steering wheel are reminiscent of the original smart. Two smartphones are mounted on the dashboard and on the centre tunnel at the rear for cutting-edge connectivity and tailor-made entertainment for all four passengers.

The electric drive housed at the rear is based on the current smart fortwo electric drive. Thanks to the 55 kW magneto-electric motor the smart fourjoy is agile and lively to drive.

The lithium-ion battery has a capacity of 17.6 kWh. When completely empty it takes a maximum of seven hours to fully charge the battery at a household socket or charging station on the electricity systems of most countries, i.e. overnight. The charging time at a wallbox or public charging station can be shortened to less than one hour with the 22 kW on-board charger and a rapid charging cable.

For the last mile: electric skateboards and helmets
Two longboards are fastened on the roof of the smart fourjoy. With these electrically driven skateboards it is possible to cover short distances in the city without producing any local emissions.

Helmets are stowed under the rear seats. A high-definition camera that is simple to remove is also attached here. This enables longboard riding to be filmed and subsequently shared with friends on social networks.