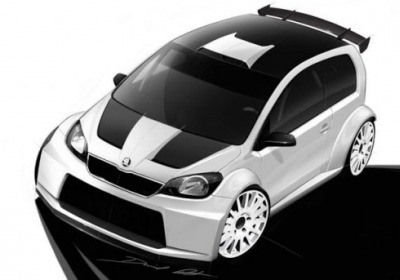 If you thought the Volkswagen Group was about to wind down the endless stream of concept cars based on the new Up! city car, think again. Because not only is the Volkswagen brand itself keeping the train a-moving, so are its sister brands.

Skoda has its own version of the Up called the Citigo. But what racing fans know the Czech subsidiary for best is its rally program that has become a dominant force in the Intercontinental Rally Challenge and the basis for VW's own foray into the World Rally Championship. Now Skoda is bringing the two together with an exciting concept car previewed by the rendering above and confirmed in the press release below.

Following in the footsteps of the tantalizing Fabia roadster unveiled last year, the Citigo Rally concept is to be the centerpiece of the Skoda display at the Volkswagen Group's annual hot-hatch gathering at Lake Wörthersee in Austria. Details are scarce, but the show car will feature rally-inspired bodywork complete with 18-inch white alloys packed into aggressively flared wheel arches, a substantial rear wing and vents aplenty.

It will be joined by a second Citigo converted into a mobile DJ booth with a 100,000-watt sound system that will be scoring the Skoda booth at Wörthersee, but our eyes will be on the rally concept.

Design Highlights of ŠKODA AUTO at the 31st Volkswagen GTI Meeting at Wörthersee
Mladá Boleslav/Reifnitz, May 15, 2012 – At the largest tuning event featuring vehicles of the Volkswagen Group, ŠKODA AUTO will show exciting concept cars. At an exhibition area of more than 600 m², the concept cars "ŠKODA Citigo Rally" and "ŠKODA Citigo DJ Car" will make their first appearance. In the evening, an international top DJ will perform on the center stage of the ŠKODA concert area. Tomorrow, seven teams will already set out from Prague with ŠKODA vehicles and head toward Lake Wörthersee in Austria.


The village of Reifnitz is a traditional meeting place for tuning fans. Every year in May, one may experience the pure excitement about automobiles, this year being the 31st time the meeting is held. This meeting is counted among the largest and most important events of its kind. As the third largest brand of the Volkswagen Group, ŠKODA presents new model highlights to fans as well. For the concert highlight in the evening, ŠKODA has created a special surprise. The music produced by the almost 100,000 Watt strong sound equipment will be mixed by a DJ in a "ŠKODA DJ Car". This vehicle was especially designed by the ŠKODA design team for the car show at Wörthersee. A team of journalists and Czech celebrities in special ŠKODA models will drive from Prague to the foothills of the Austrian Alps – among them the two Škoda rally champions Jan Kopecký and Juho Hänninen.

"They say the driver's seat has the best view of Wörthersee," says Jan Kopecký, ŠKODA Motorsport factory driver. "That's why I'm excited to be able to experience in person the legendary atmosphere at Wörthersee this year."

The creations based on the new ŠKODA Citigo are sure to fascinate attendees at ŠKODA's stand in Reifnitz. The design of the "ŠKODA Citigo Rally" takes its dynamics from ŠKODA rally cars. Its front end impresses with a massive bumper as well as a generous air intake and spoiler. The car's rear end is marked by a centrally positioned exhaust end pipe and the down-force wing extending the car's roofline. Low-profile tires on forged 18-inch rims promise stability and uncompromising traction.

The drive from Prague to Lake Wörthersee is not about a fast highway trip down to Austria: Instead, participants such as the ŠKODA rally stars as well as Czech celebrities will have to perform various tasks during the course of the trip. ŠKODA Fans will be able to follow their results as well as the progress of the trip on the official ŠKODA Facebook page at www.facebook.com/skodaweb.