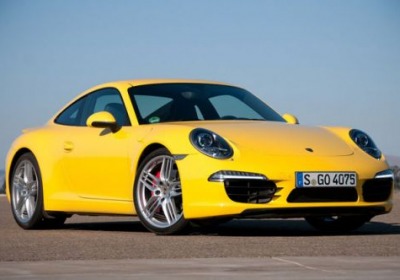 Robb Report has picked the seventh-generation Porsche 911 Carrera S as its 2013 Car of the Year, saying the two-door captivated its judges with "agility, driving dynamics and balance." The German coupe bested 12 others who were also in the running – the impressive list of nominees included the BMW M5, Audi S8, Ferrari FF, Mercedes-Benz SL63 AMG and the Bugatti Veyron 16.4 Grand Sport Vitesse.

Judging involved more than just throwing darts at pictures on the wall, as the publication enlisted a panel of automotive experts to test drive each vehicle for close evaluation. The panelists included 100 members of the Robb Report Club (comprised of top corporate executives and influential readers), Editor-in-Chief Brett Anderson and automotive consultant Robert Ross. Full results of the competition will be revealed in the luxury magazine's March issue, hitting newsstands in about a week. For more information, visit Robb Report online or check out the full press release from Porsche below.

Atlanta. The seventh-generation Porsche 911 Carrera S has been named the 2013 Robb Report Car of the Year. Captivating the judging panel with its agility, driving dynamics and balance, the 911 bested 12 other competitors for the award and will be featured on the cover of the March issue of the luxury lifestyle magazine.


"Winning Robb Report's 2013 Car of the Year award for the Porsche 911 is a proud achievement for our brand, especially as we celebrate our flagship model's 50th anniversary this year," said Detlev von Platen, president and CEO, Porsche Cars North America, Inc. "This prestigious award means a lot to us, as it was voted on by potential customers, and it further solidifies the 911's standing as one of the world's most sought-after sports cars."

"Porsche has taken a 50-year-old design and constantly refined and improved it without altering a single word from the original mission statement, and it has kept the price relatively affordable," said Robert Ross, Robb Report automotive consultant. "In the truest Miesian sense, the 911 proves that less is more."

Full results from the Robb Report Car of the Year competition will be revealed in the magazine's March issue, which will hit newsstands on February 26.