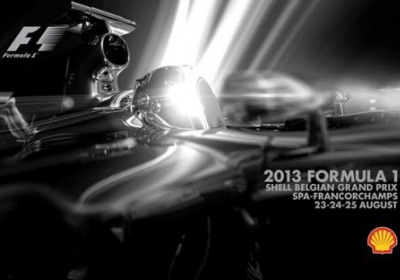 It's been four weeks since we last saw a Formula One race, when Lewis Hamilton improbably put his Mercedes-AMG Petronas in P1 in Hungary. Even more improbably, he held onto the first spot at the finish of the race, ahead of Kimi Räikkönen in the Lotus and Sebastian Vettel in the Infiniti Red Bull.

Resuming the season at Belgium's Spa-Francorchamps circuit this weekend, Hamilton picked up his recent – and just as improbable – pole-setting form by putting the Mercedes in P1 for the fourth time in a row. The effort came during a qualifying session visited by intermittent rains and dry spells, his 54th trip to the front of the pack, tying Niki Lauda.

But neither the fireworks and surprises, the mid-field full of backmarkers, nor the tire strategies and timing choices changed the mission for the drivers in with a chance at the title: finish in front of Vettel.


The saying goes that if it rains one on day of the Belgian Grand Prix weekend, it will rain all weekend. That didn't happen this year, the wetworks from Friday and Saturday staying away on Sunday. When the lights went green, Hamilton got a terrific start, Vettel just a beat behind, the latter turning quickly to defense mode against Mark Webber and Nico Rosberg. Vettel kept his second spot around the first turn, and by the entry to Eau Rouge, he was done with defending and lining up Hamilton for a pass. By the exit of Eau Rouge, he was putting his front wing under Hamilton's gearbox. A few hundred meters down the Kemmel Straight, Vettel was pulling up next to Hamilton, by the time they were done with the next corner, Les Combes, Vettel was past and gone.

By the end of the first lap, Vettel had a 1.5-second lead, and each lap saw him add another 1.5 seconds to his lead until, on lap three, 4.5 seconds ahead, his race engineer told him, "Save your tires, we don't need any more than this."

Hamilton wasn't troubled by anyone behind for the next ten laps until Fernando Alonso put his Ferrari in the Mercedes' rearview mirror on Lap 11. Alonso was diplomatic about his Ferrari's performance after qualifying, but a lackluster showing left him in ninth and Felipe Massa in tenth. Still, Alonso said he thought he could win the race from ninth, and he didn't exactly look like a liar as he worked his way around Hamilton on Lap 15 to take second place.

That meant that one-third of the way into the 44-lap race, the final podium was locked in. But that didn't stop the action elsewhere, for good reasons and bad.

Sergio Perez in the McLaren was given a stop-go penalty for pushing Romain Grosjean in the Lotus off the track while heading into Les Combes. Strangely, Toro Rosso's Jean-Eric Vergne wasn't punished for a very similar incident with Sauber's Nico Hülkenberg later in the race. Perez finished in 11th after starting 13th and could have got some decent points if not for the incident. Grosjean finished in eighth after trying a one-stop strategy. The Lotus is very good on its tires, but even so, he couldn't post strong enough lap times on a long circuit that has the cars at full throttle almost four-fifths of a lap.


His teammate Räikkönen didn't make it to the end of his race, but he did make it to the end of his luck. Before Belgium, the Finn had finished 38 straight races going back to his last year in the sport with Ferrari, and finished 27 of those in the points. Coming into Chicane at the end of Lap 26, Räikkönen drove straight off the track, a message "You're out of brakes" explaining why he immediately crossed the track into the pit lane and retired. Before the break, Räikkönen had said that he'd have to start winning races to have any chance of winning the driver's title. Instead of doing that, his retirement, and Vettel's win, dropped him to fourth in the standings behind Vettel, Alonso and Hamilton.

Paul di Resta was also cursed this race. The Scot has been trying to revive his fortunes after a run of team errors and poor qualifying performances, and looked to have done it after a gamble in the Q3 qualifying session saw him take the early pole time before the rains came. The weather cleared in Q3 a few minutes before the end, the drying track giving the big teams a chance to get ahead of him, but di Resta still started fifth on the grid. The Sahara Force India didn't really have the race pace, though, and he was soon running just outside the top ten.

On Lap 28, during a five-way battle with teammate Adrian Sutil, Gutiérrez, Nico Hülkenberg in the second Sauber and Pastor Maldonado in the Williams, the bunch was going through Chicane when Sutil, turning left to catch the second apex, cut across Maldonado's nose and tore off the latter's front wing. Di Resta was coming up on Maldonado's outside when it appeared that Maldonado decided to head across the track into the pits. The Williams drove straight into di Resta's left rear wheel, immediately ending the Scotsman's race. Incredibly, Maldonado would get to the pits, get a new front wing – and a drive-through penalty – and finish the race in 17th.

Every race should begin with a question about Mark Webber's drive: Which issue will kill Webber's chance of a win? The choices would be, A) A poor start, B) A KERS failure, C) Some other mechanical issue or D) "The pace just wasn't there." That list could address almost every race in Webber's recent career. In Belgium, the answer was A, when a clutch issue at the start saw him go backward at the green lights. He would finish in fifth, two spots down from where he started.

The top ten at the finish was Vettel, Alonso, Hamilton, Rosberg – who started fourth, Webber, Button – who started sixth, Massa, Grosjean, Sutil and Ricciardo. The Aussie in the Toro Rosso had quite the drive, a team mistake in qualifying getting he and Vergne kicked out in Q1. Ricciardo passed Perez in the final laps for the single point, and to make another point to the bosses at Red Bull that perhaps he should get Webber's vacant seat next year. There was a bit of excitement after the race when Webber told the BBC in an interview that a driver had been chosen for Red Bull and it "was a good decision for Australia," which everyone took to mean that Ricciardo got the seat. Neither the team nor Ricciardo has said anything, though, so that's all just rumor for now.

There's no question about the challenge for the rest of the season, however. Vettel won by 16 seconds after being told to speed up because of potential rain, then slow down again when the rain didn't come, and he said he still had pace left in the car. His 31st win puts him even with Nigel Mansell on the all-time list and gives him 197 points in this year's Driver's Championship, followed by Alonso at 151, Hamilton at 139 and Raikkonen at 134.

Over in the Constructor's Standings, Red Bull now has 312 points, Mercedes is a distant second at 235, followed by Ferrari with 218 and Lotus with 187.

The last European leg comes in two weeks at Monza, where Hamilton says the Mercedes will probably struggle again, and Alonso will be hoping the home-field juju gives him a chance to take some points from Vettel. The way things went in Belgium, though, it looks like the only hope for every title aspirant would be Infiniti Red Bull getting the same result it got at Monza: a double DNF.

We'll see you then.