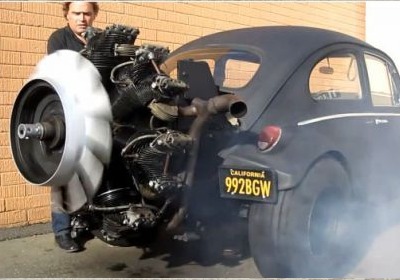 Sometimes you meet folks who, when they tell you "Hey, I have an idea," your reflex response is to stop what you're doing and tell yourself, "Get ready...." We imagine Mike Niemans is one of those folks, and the idea in question is putting a tank engine on a Type 1 Volkswagen Beetle. Not just any old tank engine – as if there were such a thing when we're talking about putting them in cars – but a 668-cubic-inch, 220-horsepower radial engine built by Continental in 1941 and procured from an M2 tank.

In the image above Nieman is using the tank clutch hub to get the motor set up, but in one of the images below you can see what really belongs back there is: a two-inch, reverse-pitch prop taken from a wind generator. He says there's enough mojo with the propeller action to get the car rolling down the runway like a jet when he gives it gas – and speaking of gas, the engine's been refitted to run on propane.

After a few safety tweaks Nieman's going to take the matte-black Beetle to Bonneville, "put the prop on, let her go and see what happens!" We can't wait to see the video of that. There are two shakedown videos below to get you ready.