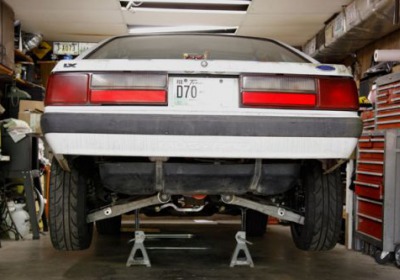 I was fully prepared to embark on a seven-day journey down a rabbit hole of broken bolts, internet hearsay and consternation.

This should not have gone this easily. Having a long and checkered history of simple projects punctuated by much wailing and gnashing of knuckles, I was fully prepared to embark on a seven-day journey down a rabbit hole of broken bolts, internet hearsay and consternation when I finally decided to lay hands on the '89 Mustang with the goal of relieving the car of its stock rear axle. Instead, it took less than a full morning's worth of work to carve the old 7.5-inch solid axle from its moorings and mock up something, well, different.

You see, after my enablers friends at a local Ford Mustang salvage shop made mention of how easy it would be to plunk an independent rear suspension from a 2004 Mustang Cobra in the ass-end of my decrepit hatch, I became consumed with the notion. Sure, anyone with half a lick of sense and the synapses necessary to fire off a Google search will tell you the stock hardware can be made to handle quite well with a few modest modifications, but the IRS held a number of unique appeals. Chiefly, the conversion actually made financial sense.

Listen, you can't give me any look I haven't seen from my wife on a weekly basis for the past four years, and sheltered as I am from the glare of your skeptical eyes, I'll expound on the dollars and cents argument for gracing my $400 car with more than $900 worth of engineering.

Picking up the five-lug spindles and Mustang Mach 1 brakes from the salvage shop had helped me garner the institution's good graces and earn a respectable discount on the independent rear. While the kit will set you back somewhere around $1,200 on eBay, the Mustang shop offered up this particular rear for nine bills flat. And what, perchance, did those nine one hundred dollar bills purchase? Besides the obvious IRS cradle and axles, the move stepped the car from a 7.8 rear differential to a significantly more sturdy 8.8. And not just any 8.8, either. This is an 8.8 with 4.10 gears. Given that I neither have designs for lofty horsepower or top speed figures, the gearing should help Ugly Horse pop out of corners with a bit more zest than the 3.73 gear that came from the factory.

So sporting is that particular set up that the company's engineers saw fit to endow the base Ranger with the same hardware.

And then there are the brakes. Ford graced the '89 Mustang LX with small, somewhat pathetic rear drums. And by, "somewhat pathetic," I really mean, "God damn awful." So sporting is that particular set up that the company's engineers saw fit to endow the base Ranger pickup with the same hardware. By contrast, the '04 Cobra came wearing somewhat epic 11.25-inch rear discs pressed by single-piston calipers. It's the kind of heat-dispersing goodness track day dreams are made of and should make a nice compliment to the Mach 1 get up I already employed up front.

The changeover also held the promise of matching the front spindle's five-lug pattern and served up a rear sway bar thick enough to be obscene. Tally an 8.8 solid axle swap, five-lug axles, disc brake conversion, sway bar and 4.10 gear, and you're quickly strutting right up to the $900 entry fee even with junk yard finds. Of course, that route would also leave me without the lusty weirdness of a four-cylinder Mustang with a Cobra rear end.

My wife and I looked like the victims of an axle-grease Claymore tragedy.

The decision was made, the rear extracted, hauled and settled in my garage for all the appropriate poking, prodding and cleaning. A bit of looking discovered a Kenny Brown forward torque brace already installed, which is a $150 piece designed to keep wheel hop to a minimum. Of course, the brakes were trashed and the CV boots had long ago given up the good fight. Sourcing the brake hardware was as easy as calling up the local parts store, but as I would soon discover, finding replacements for those CV boots would require some serious interweb sleuthing. You see, no one will sell you just the boots. Ford will kindly set you on a new set of axles for $500 a side and Dorman will happily rebuild yours for around $350 each, but no one feels comfortable handing out the boots themselves. I never even got so much as a "You'll put your eye out, kid."

After a particularly distressing evening that saw my wife and I square off against an axle, a boot from a 2002 Ford Explorer, some axle grease and a can of Pledge, I was on the verge of conceding victory to the bastards who wanted my hardly earned money for a set of new axles. But the internet works in mysterious ways, and even though I had searched "2004 Ford Cobra IRS CV Boot" approximately 2.75 million times between the moment I dragged the IRS home and the evening that saw my garage, my wife and myself look like the victims of an axle-grease Claymore tragedy, one more search pointed me toward CV Unlimited in Hemingway, South Carolina.

Technically, the company merely rebuilds CV axles, but I reckoned that also meant they had parts lying around. Parts like my damned CV boots. I gave them a call. A voice on the end of the line transferred me to the shop, where it took one individual two seconds to not only confirm that they had the boots, but that they would cost me a paltry amount. Given that I was prepared to trade any number of lesser internal organs for the bits, I was elated. As in, big, beautiful man tears elated.

The boots arrived quickly and installed in about 15 minutes flat. I replaced the inner differential seals, filled the chunk with fresh synthetic fluid, slapped everything together and was content to wait to install my pretty new cradle until I could iron out necessaries like a drive shaft and brake lines. But the Mustang chose this moment to blow a wheel cylinder and urinate brake fluid all over my garage floor. Given that I have all the patience of a bull in heat when it comes to playing with new toys, I set about carving on my car.

I supported the body on jack stands, placed a floor jack under the differential and commenced to removing parts. The driveshaft came out first, followed by hydraulic brake lines and the emergency brake cables. I found that using a 13-milimeter boxed-end wrench to compress the retaining clips assuaged all sorts of bellyaching. From there, it was as simple as unbolting the shocks and letting the axle down enough to allow the springs to fall out of place. Once done, all that remained was zipping out the old lower control arms. Since I left the wheels and tires in place, the whole contraption merrily rolled out from under the car, leaving me with a gaping hole where my suspension once sat.

Using a few sketchy IRS install write-ups for guidance, I set about test fitting the cradle. The front mounting locations slide right into the points for the old lower control arms, and lifting the assembly up and into place allowed me to correctly mark where I would need to drill and cut. That's right, I said drill and cut. Technically, the rear subframe has one mounting hole already set up to accept the IRS bracket, but the inner fender needs to be trimmed ever so slightly and three additional holes need to be drilled. From what I've read, the stock threaded location is typically used for quad-shock mounts. With one bolt in each side, I marked the bracket locations, busted out the drill and went to town under a shower of searing hot metal shavings. It's not as sexy as it sounds.

Since the interior was already removed from the car, I didn't have to concern myself with sullying any carpet or sound deadening. Make no mistake, though. The sheetmetal inside the rear hatch is thinner than most of the excuses I wielded in high school, so a friend whipped up a set of reinforcements hewn from bar stock. Plopping in the grade-8 hardware left everything snugged into place for a temporary test fit.

All told, the swap seems to have left me with a rear track that's about .75 inches wider than stock, and the Chrysler steelies look right at home tucked under the car for the time being. Next time we'll deal with plumbing the rear brake lines, installing an appropriate drive shaft and removing some vestigial brackets.