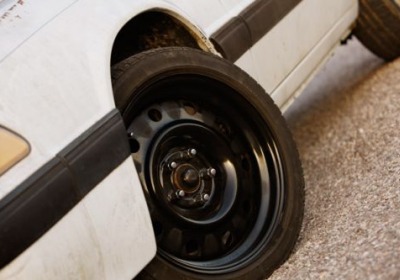 I've had a healthy appreciation for cars that stop since one truly unfortunate incident with a runaway 1971 Lincoln Continental.

It's funny how quickly a party can turn from, "We're all having blast" to "What happened to the front of the house, and how many stitches do you think this is going to take?" Standing in a Mustang salvage shop in Kodak, Tennessee, I couldn't help but feel I had strayed into the latter territory with Ugly Horse. There was a supercharged 5.4-liter V8 plucked from a rear-ended Cobra sitting off to my left. The shelves were lined with second-hand Roush and SVT components galore, but I couldn't stop staring at a set of rotors with the approximate diameter of my chest.

Plucked from a 2003 Mach I, the package deal included a set of five-lug hubs, 13-inch rotors and dual-piston PBR calipers for the princely sum of $300. If you're paying attention, that figure is nearly 3/4 of what I paid for my whole Mustang. Still, I've had a healthy appreciation for cars that stop since one truly unfortunate incident with a runaway 1971 Lincoln Continental 12 years ago, and the hardware that was staring me in the face should be enough to pull the freckles from my skin should I get serious with the brake pedal in the Fox. I fished three slumbering 100 dollar bills from my wallet, laid them on the counter with a wince and walked out with a set of parts that set this project down an entirely different path.

Need to catch up on Project Ugly Horse? You can check out earlier posts here!

The platform encourages cherry picking parts from 1979 all the way to 2004 models, within reason.

There are plenty of reasons to love the Fox Body, not the least of which is the fact that the platform encourages cherry-picking parts from 1979 all the way to 2004 models, within reason. While Ford technically switched to the SN95 chassis in 1994, the shift was little more than an extensive rebody. That's nearly a quarter of a century of engineering that will bolt up to this tub with very little modification, and why I could rob bits from a car built some 14 years after mine rolled off of the assembly line. I laid down a little extra cash for a set of 1995 Mustang GT spindles as well as new ball joints and got to work.

Working on a Mustang really is just like playing with big, rusty Legos.

After perusing a few build threads, I set about gutting the old four-lug (left) set up and dropping in my new components (right). The process is as simple as disconnecting the old brake line and unbolting the front shock, tie-rod end and the ball joint, in that order. From there, the whole shebang should come out in one piece like an adorable little bundle of oxidation and decay. After speaking to a few knowledgeable folk, I came to understand the '95 spindles offered the closest approximation to the stock '89 steering geometry while playing nice with the five-lug rotors and caliper mounting points from the Mach I.

Working on a Mustang really is just like playing with big, rusty Legos. After getting the entirety of my new cobbled front end in place, I realized there was something amiss. The stock shocks were nowhere near bolting up to my new spindle, which meant I had lots of hardware simply flopping about in the wheel well. Something told me the situation wouldn't pass tech, no matter how many beers I floated the inspectors. Fortunately, there's a pick-your-own salvage yard not five minutes from the house, so I packed up an away team from the tool box and set to poking around on the carcasses of a few unfortunate Mustangs for the bits I needed.

I failed to calculate the pain-in-the-ass tax, and after 20 minutes would've paid just about anything for the pieces I needed.

I had no pretentions of using anything I scavenged from the yard on the finished product, but picking up a set of old shocks for $5 for test-fit purposes seemed considerably more appealing than ordering and returning new shocks from the local parts store. Of course, I failed to calculate the pain-in-the-ass tax, and after 20 minutes of wrenching in a freezing scrapyard with a pleasant drizzle pelting me in the face, I would have paid just about anything for the pieces I needed. After snapping my grandfather's breaker bar and sucker punching the inner fender well of a '95 shell with every last ounce of my meager strength, I drug my bits home and threw them in the corner of the garage to think about what they'd done.

Once the swelling in my hand subsided enough to put on a set of work gloves again, I began working the salvage components into my Mustang. Sure enough, the shocks fit the five lug conversion into its home nice and snug with just one problem. Even with the maximum adjustment set into the stock components, my front camber was off by a country mile. I'll have to source a set of quality aftermarket camber/caster adjustment plates to cure that ail, and even then, I may have to resort to some mechanical coercion.

Fancy new brake hardware is pretty useless unless you're pushing fluid through the calipers.

Of course, fancy new brake hardware is pretty useless unless you're pushing fluid through the calipers, so I had a set of braided stainless lines cooked up by Royal Brass and Hose here in town. I simply took the original lines and the new calipers to the counter and the guys matched the fittings with some swank braided line for less than $50. I installed everything, bled the lines and realized for the second time during this operation that I was missing yet another crucial component. I didn't have any five lug wheels lying around, which meant the car was stuck with its nose on jack stands until I could come up with a solution.

A quick search on Craigslist turned up a set of nearly new Chrysler 300 wheels. Not only did the lug pattern match, but at 17 inches, they were large enough to wrap around my hefty front brakes. While I would love to eventually lay a smoking set of wheels on this thing, at the time, I just needed it to roll, and $60 was a fair price to pay for that convenience. A quick stop by the world's shadiest used tire shop on the way home resulted in four wheels coated in serviceable rubber for a total investment of $90. Mobility: acquired.

Aside from blown shocks and the world's worst alignment, everything functioned as intended.

As anyone who's ever had a project will tell you, the ability to roll is often followed by the desire to drive, and I'm not exactly one to turn down a quick sprint around the block, or in this case, to the gas station. Aside from blown shocks and the world's worst alignment, everything functioned as intended with no binding, rubbing or other ailments. The swap left me with five lugs up front and four out back, but one of the guys at that salvage shop in Kodak said something before I left that kept me up at night for a week solid.

"You know, I have a full independent rear suspension from an '04 Cobra out back that will bolt right up to your car..."