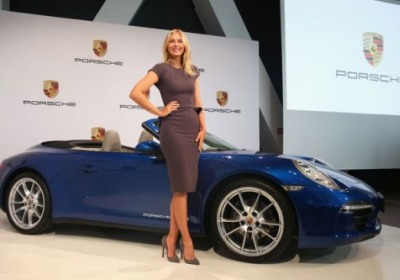 Russian-born tennis superstar Maria Sharapova has just inked a three-year deal with Porsche to be its brand ambassador, a position that will put her on a global campaign for the German automaker. The 26-year-old athlete isn't new to the role – she previously signed a similar three-year deal with Land Rover in 2006.

"Maria Sharapova is an exceptional athlete. She combines top performance in her sports with elegance and power. These are precisely the qualities that are embroiled in our sports cars," explained Matthias Mueller, CEO of Porsche AG, during the announcement. "Her profile and charisma are an ideal fit for Porsche. She is also highly respected around the world and enjoys an outstanding reputation," he added.

Some consider Porsche's choice of a female tennis player as its ambassador interesting, if not surprising. The automaker has traditionally marketed its vehicles with a masculine edge – Sharapova and the sport of tennis position the brand in a different light – likely an intentional decision. Do you think Porsche's choice was a good one? If not, who would you choose as its global ambassador?

Stuttgart. Tennis megastar Maria Sharapova has taken on a new role: effective immediately, the 26-year-old world class player will be representing the sports car manufacturer, Porsche AG, as brand ambassador. The cooperation is initially signed for three years and involves a global communications campaign. The athlete is already very familiar with the vehicles from Zuffenhausen: as last year´s winner of the Porsche Tennis Grand Prix in Stuttgart, Sharapova not only took home prize money, but also a white 911 Carrera S Cabriolet.


Born in Russia and living in the United States, Sharapova has achieved victories at all four Grand Slam tournaments in women's tennis and she was ranked number 1 for a total of 21 weeks.

"Maria Sharapova is an exceptional athlete. She combines top performance in her sports with elegance and power. These are precisely the qualities that are embroiled in our sports cars", as Matthias Mueller, CEO of Porsche AG, explained in today's introduction of the partnership. According to Mueller it was not easy to find the right person to be Porsche´s ambassador. "Maria Sharapova is the perfect choice. Her profile and charisma are an ideal fit for Porsche. She is also highly respected around the world and enjoys an outstanding reputation."

"This is a really special day for me," said Sharapova. "I have had the privilege to be associated with some of the best brands in the world, but now to be partners with Porsche, is such an amazing honor," she explained during her presentation in Stuttgart.

For Porsche, the choice of Maria Sharapova as brand ambassador extends its long-term commitment to women´s tennis. The company sponsors the German women's national team, which competes as the Porsche Team Germany in the Fed Cup, and the Porsche Talent Team Germany, which supports promising young players. "We are fully committed to these activities for a long term. And with Maria Sharapova, we are now extending our involvement in women's tennis globally", Mueller added.

Maria Sharapova was born in the Western Siberian town of Nyagan on April 18, 1987. She moved to Bradenton on the Gulf Coast of Florida (USA), when she was seven years old. Two years later she was accepted at the world-renowned Tennis Academy of coach Nick Bollettieri. In 2004, at the age of 17, she won her first Grand Slam tournament at Wimbledon, the third-youngest player ever. This feat was followed by titles in the other three Grand Slam tournaments: U.S. Open 2006, Australian Open 2008, and French Open 2012. To date, Maria Sharapova has won a total of 28 singles titles, including last year´s Porsche Tennis Grand Prix in Stuttgart, the WTA Championships in 2004, and the silver medal at the 2012 Olympic Games in London. Along with her involvement in the "Maria Sharapova Foundation", she is also active as ambassador of the United Nations Development Program.