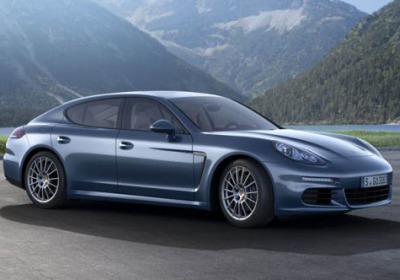 Diesel may not be the first thing that comes to mind when you think of Porsche, but in the European market – that vital one which Porsche calls home – diesels are indispensable. Particularly when you're trying to extend beyond niche sports cars and into the mainstream luxury sedan market as Zuffenhausen has with the Panamera. In fact, diesels account for 15 percent of Panamera sales worldwide (even though they're not offered Stateside), so to keep oil-burning customers happy, Porsche has announced a series of upgrades.

Set to be unveiled in the flesh at the fast-approaching Frankfurt Motor Show, the new Panamera Diesel packs 300 horsepower. That's 50 hp (or 20 percent) more than the model it replaces, significantly dropping the 0-62 sprint from 6.8 seconds to 6 flat, and raising top speed from 152 miles per Autobahn-crunching hour to 161. While they were at it, Porsche's engineers also fitted the rear differential with torque vectoring (previously reserved for gasoline-burning models) and retuned the transmission and suspension.

You can delve into the press release below for all the details – including the new model's improved towing capacity! - but the reality, for better or worse, is that the Panamera Diesel isn't offered here. So if you've been celebrating Labor Day (or even Labour Day, for our friends to the north) like we have, don't go looking for it at your local dealer, who will have only a Cayenne Diesel to show you instead.

A new engine, more power and improved dynamic performance
A three litre engine with an output of 300-bhp: The Porsche Panamera Diesel has become even more attractive


Stuttgart. With its completely new 300-bhp engine and dynamic performance package, Porsche has made the Panamera Diesel even more attractive just in time for this year's International Motor Show (IAA). The vehicle has once again been kitted out with a six-cylinder V-engine with a displacement of three litres, and the power output has been increased by 50 bhp, equivalent to a considerable 20% increase in performance compared to the predecessor model. As a result, the acceleration time has been reduced by eight-tenths of a second, meaning that the new model goes from 0 to 100 km/h in 6.0 seconds, while the top speed has increased to 259 km/h compared to the 244 km/h achieved by the previous model. In addition to the improved power output, dynamic performance has also been optimised: For instance, the Panamera Diesel now features the controlled rear-axle differential lock with Porsche Torque Vectoring Plus (PTV+) as standard for the first time – to date, this feature has been reserved for the petrol engine Gran Turismo models. The transmission and chassis have also been retuned. Around 8,500 Panamera Diesel vehicles have been delivered so far, and the model accounts for a share of around 15% of the complete Panamera model range.

The only aspect that still remains of the previous Panamera Diesel's V6 engine are the basic engine dimensions. The moving parts in particular, such as the crankshaft drive and pistons, have been completely re-designed and dimensioned with the aim of increasing the power output. Porsche has combined its new engine with a water-cooled turbocharger for the first time, too. The new turbine provides a greater air flow as well as a higher boost pressure of 3 bar (formerly 2.5 bar).

In addition to the increased power output of 300 bhp (221 kW) at 4000 rpm, the rated torque has also been increased by 100 Newton metre to 650 Nm at engine speeds of between 1750 rpm and 2500 rpm, providing even greater power at lower speeds. This power needs to be reliably converted into traction, which is where PTV+ comes in: The system comprises an electronically controlled, fully variable rear-axle differential lock and targeted, individual brake interventions at the rear wheels. At low to moderate speeds, the PTV Plus improves agility and steering precision; at high speeds and when accelerating out of bends, it delivers greater driving stability. As a result, the Panamera Diesel can now handle trailer loads of up to 2600 kg effortlessly, meaning that it is better able to tow attachments like horse boxes than its predecessor.

The more powerful characteristics of the turbo engine also offered an opportunity to re-tune the transmission. In order to reduce fuel consumption and improve comfort at higher speeds in particular, the gear ratio is longer for the rear axle, meaning the Panamera Diesel uses a lower engine speed to achieve the required vehicle speed. The Gran Turismo with the new engine offers an NEDC fuel consumption of 6.4 litres/100 km, which is equivalent to 169 CO2/km. In addition, gears one to four of the eight-speed Tiptronic S transmission have been designed with a shorter gear ratio, giving the Gran Turismo an impressively powerful acceleration and sprint capability. This improved agility is also evident in the running-gear set-up: The anti-roll bars on the front and rear axle are slightly more rigid, giving the Panamera Diesel a sportier feel than its predecessor.

The Panamera Diesel with the new engine replaces the current 250-bhp variant and will be available on the market from January 2014 onwards. The vehicle costs EUR 85,300 including VAT in Germany.