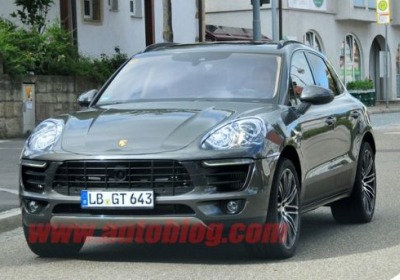 Porsche is preparing to launch its sub-Cayenne CUV, with a suspected debut at the 2013 Los Angeles International Auto Show, which means we're right about at the point where undisguised models start scampering around the cities and towns of Germany. Our spy photographers snagged just such a model, with only the headlights and taillights concealed by camouflage (no, those comically large lamps aren't a production item).

The undisguised car looks like a tiny Cayenne. Not really surprising, we know, but it's impressive to see how the Cayenne's styling works with the smaller proportions of the Macan. It looks squat, athletic and poised, like it's a small, "sporty" crossover we'd actually want to drive. Both the Macan and the Macan Turbo are shown, with the more powerful model sporting a set of quad exhausts.


The only big questions now concern the shape of the lights and the interior. From the photos, we can see a rough outline of the headlights, although the taillights are more difficult to discern. The interior remains a mystery.

Thankfully, LA is less than four months away, so we won't have too long to wait to see a fully uncovered Macan.