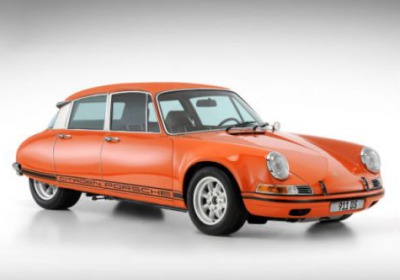 The early Porsche 911 and the Citroën DS were two cars produced in the same era (though the DS launched in 1955, nearly 10 years before the 911), but they were vastly different from each other. The 911 was a uniquely German, pure-bred sports car, while the French-built DS had four doors and focused more on ride quality than sporting intentions. That made it all the more surprising when we came across the 911DS, a creation that binds the rear half of the Citroën to the front of an early, longhood 911.

The folks at Brandpowder are behind the creation, which we surmise was an exercise in design rather than an actual, completed project (some of the images look Photoshopped), but it's compelling nonetheless, with a turbocharged flat-six providing 260 horsepower. We hope someone builds it – though we're sure if that happened the early 911 crowd would cry afoul at one of its increasingly rare and valuable Porsches being grafted onto an old French car.


But as Brandpowder points out lightheartedly, perhaps the creation could transcend popular car culture: "The 911DS represents the effort of two countries, a genuine attempt to join their energy and talent into one thing. We hope Germany and France will be inspired by Brandpowder's story, as a metaphor for a better and greater Europe."

Check out the photo gallery of the Porsche-Citroën creation, and tell us what you think of it in Comments.