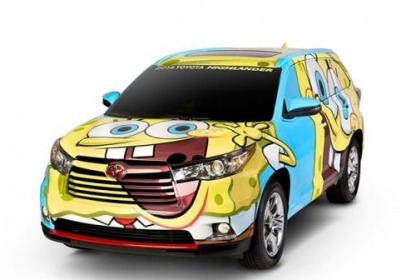 The launch of the 2014 Toyota Highlander is being assisted by Bikini Bottom's number one resident, SpongeBob SquarePants. The new crossover has been wrapped with SpongeBob's square mug all over it as if he's saying "I'm ready. I'm ready. I'm ready. I'm ready," from every direction. Inside is a cabin that Toyota says "captures all of the beloved character's high-octane energy," but might make you question whether this is really the world you want to live in.

Revealed on SpongeBob Day at the San Diego Padres vs. San Francisco Giants baseball game in San Diego, CA on July 13, the Highlander will go from there to seven locations nationwide on a "Happy Driving Tour," ending at the LA Auto Show in November.

You can read all about it in the press release below, as well as ways to fill your life with more SpongeBob than is probably healthy.

NEW YORK, July 12, 2013 - Nickelodeon and Toyota are making this the best summer ever for SpongeBob fans with the creation of the first SpongeBob SquarePants-inspired vehicle. The SpongeBob 2014 Toyota Highlander will feature a custom SpongeBob-themed exterior and an interior design that captures all of the beloved character's high-octane energy. The one-of-a-kind concept vehicle will be unveiled on July 13th, during Nickelodeon's SpongeBob Day at the Padres vs. Giants game in San Diego, Calif. The car will then hit the road for a "Happy Driving!" promotional tour throughout the U.S., bringing SpongeBob's special brand of fun to seven locations across the country.


"We are thrilled to partner with Toyota to produce this truly unique SpongeBob SquarePants-themed Highlander," said Pam Kaufman, Chief Marketing Officer, Nickelodeon Group. "Through the 'Happy Driving!' program, SpongeBob fans across the nation will have a chance to interact with SpongeBob in a whole new, four-wheeled way."

"We are pumped and honored to partner with Nickelodeon, and especially SpongeBob, to help launch the all-new 2014 Highlander. Like the Highlander, SpongeBob is family friendly and just plain fun – what more could you want in a family vehicle and cartoon?" said Jack Hollis, VP of marketing, Toyota Motor Sales, U.S.A., Inc.

The redesigned 2014 Highlander made its global debut on March 27 at the 2013 New York Auto Show. The "Happy Driving!" tour offers the chance to showcase the all-new model of the mid-size crossover SUV. The 2014 Highlander has plenty of cargo room, enhanced safety features and a sophisticated interior – making it the perfect family vehicle to help people go places and make memories together. To learn more about the all-new Highlander, visit Toyota.com/Highlander.

Beyond the Toyota partnership, Nickelodeon will be celebrating all things Bikini Bottom this summer with a myriad of SpongeBob-themed activities taking place nationwide, capped by the first-ever SpongeBob Fan Shellabration at Universal Studios Hollywood, in Los Angeles, Calif., Sept. 7-8. This summer, Gallery Nucleus will curate and host a fan-created SpongeBob-themed art exhibition in Alhambra, Calif., July 27-Aug. 11. In August, Nickelodeon will announce the winners of the first-ever SpongeBob SquareShorts: Original Fan Tributes, a global competition that encouraged SpongeBob fans to create and submit short films, across all genres, featuring everyone's favorite porous pal. The winning short will be screened at the inaugural SpongeBob Fan Shellabration in September.