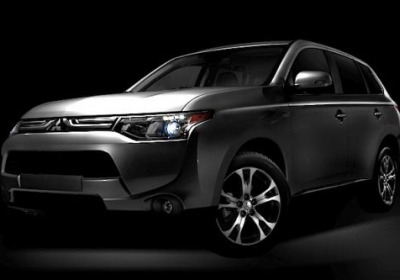 We've seen the new Mitsubishi Outlander in European form a few times already, but the 'ute has yet to make its roaring debut in the States. That's soon to be rectified, as Mitsubishi has formally announced plans to show the US-sped 2014 Outlander at the upcoming LA Auto Show.


Mitsubishi promises that the 2014 Outlander will be "among the most fuel-efficient compact [crossovers] with seven-passenger seating as standard." In addition to its new aerodynamic bodywork, the 2014 Outlander will bring with it advanced tech like Forward Collision Mitigation, Lane Departure Warning and Adaptive Cruise Control, each with its own fancy sounding acronym.

Have a look at the darkened teaser of the 2014 Mitsubishi Outlander above (note: we lightened the image a bit to bring out some detail, click on the image to see the original in high-res), and feel free to peruse the press release below for more.

Thu, Nov 15, 2012 - Cypress, California - Mitsubishi Motors North America, Inc. (MMNA) is set to launch a pair of exciting new vehicles – the North American debut of the 2014 Outlander and the eye-catching 2013 Outlander Sport Limited Edition – at the upcoming Los Angeles Auto Show during the Mitsubishi Motors press conference to be held at 10:35 AM on Thursday, November 29, 2012.


Featuring a fresh new design direction that emphasizes exterior aerodynamic efficiency accompanied by a new engine equipped with a new version of our advanced MIVEC continuously-variable valve lift timing system for increased fuel economy, the all-new 2014 Mitsubishi Outlander will be among the most fuel-efficient compact CUV with 7-passenger seating as standard. Along with a new upscale interior design and new technologically-advanced features including Forward Collision Mitigation (FCM), Lane Departure Warning (LDW) and Adaptive Cruise Control (ACC), the sharply-styled all-new 2014 Outlander elevates the level of efficiency, safety, comfort and convenience in the value-oriented compact SUV segment.

Along with the all-new 2014 Outlander and 2013 Outlander Sport Limited Edition, Mitsubishi will also highlight other important company developments during the presentation at the 2012 Los Angeles Auto Show.

Mitsubishi Motors North America, Inc., (MMNA) is responsible for all manufacturing, sales, marketing, research and development operations for Mitsubishi Motors in the United States. MMNA sells coupes, sedans and sport utility vehicles through a network of approximately 400 dealers. In November of 2011, MMNA launched the battery-powered electric vehicle Mitsubishi i-MiEV as part of a corporate mission to offer consumers more environmentally responsible modes of transportation. This battery-powered electric vehicle technology addresses the need for vehicles that produce zero tailpipe emissions and support a growing agenda for sustainability.

See also: Mitsubishi boss confirms new Mirage for US; i EV enduring dismal sales, Mitsubishi CEO vows to stay in US on heels of Suzuki's departure, Mitsubishi's first US chairman since 2007 charged with revitalizing brand.