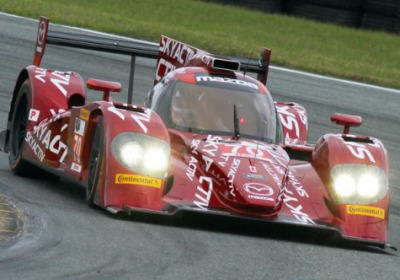 Diesel has without a doubt become the dominant fuel in the modern era of endurance racing. The 24 Hours of Le Mans has been won under diesel power for the past eight years running, as has every race in the FIA World Endurance Championship since its inauguration in 2012. Yet there will only be one diesel prototype entered in the top tier of the new Tudor United SportsCar Championship this year, and it belongs to Mazda.

The last Japanese manufacturer to win at Le Mans outright, Mazda has been gradually working its way back up the endurance racing ladder once again, following the example set by Audi with diesel power. Last year it campaigned a competition-spec Mazda6 Skyactiv-D in the GX class of the Grand-Am series, but rather than simply port over the existing racer into the new series, it's fielding a new prototype instead, just as it promised a couple of months ago. And now that prototype has hit the track for the first time, prompting Mazda to release its basic specs for the first time.

Tentatively referred to simply as the 2014 Mazda Prototype, the purpose-built racecar is testing this weekend in the Roar Before the 24, the official test session at Daytona that kicks off the racing season. It packs a 2.2-liter SkyActiv-D engine that's based heavily on the production version but tuned to produce 450 horsepower and 580 pound-feet of torque in race trim. Power is channeled through a six-speed sequential transmission from Xtrac, carbon brakes from AP and 18-inch racing slicks from Continental. With the Daytona-spec aero setup, it'll top out at around 186 miles per hour.

Oddly, despite outlining a number of very specific parameters in the press release below, Mazda didn't specify how many cylinders the engine packs or who made the carbon monocoque chassis, but it doesn't take much to deduce the cylinder count as four and the chassis as a Lola-built LMP2. Either way, a pair of these prototypes will be dicing it with a variety of other Le Mans and Daytona prototypes at the Rolex 24 at Daytona later this month and throughout the inaugural United SportsCar Championship this season. Mazda has already announced it's keeping the same four drivers in place it employed for the GX entry last season, with two more to be announced shortly.

January 4, 2014 (DAYTONA BEACH, Fla.) - Mazda has long believed in promoting from within, including filling those rare 'factory team' driver slots. Mazda Motorsports will field a pair of factory-backed SKYACTIV Technology-powered prototypes in the 2014 TUDOR United SportsCar Championship. Behind the wheel will be the four drivers who delivered nine race wins and the 2013 Grand-Am GX Manufacturers Championship for Mazda. Sylvain Tremblay and Tom Long will share the #70 car while Joel Miller and Tristan Nunez will co-pilot the #07. The team took their first public laps at the annual pre-season "Roar Before the 24" test at Daytona International Speedway yesterday. The test concludes tomorrow with the season opening Rolex 24 Hour race on January 25-26.

"There is no shortage of great racing talent in America", noted John Doonan, Director of Motorsports for Mazda North American Operations. "The decision for this year was relatively simple though as our 2013 line-up excelled both on and off the track. Sylvain, Tom, Joel, and Tristan are all talented behind the wheel, but just as importantly, they act as a true team, supporting everyone at Mazda and SpeedSource. Our objective is to demonstrate Mazda SKYACTIV Technology to both hardcore racing fans and the mainstream public. With so many changes in 2014, including the new series itself, there will be a steep learning curve for everyone and we needed the best students in the sport. We'll announce our third drivers for the Rolex 24 at a later date, but rest assured they all fit the same mold of being team thinkers and both will have Mazda heritage in their blood."

As part of its challenger frame of mind, Mazda is the only car company racing in the TUDOR Championship with a diesel engine. The SKYACTIV-D Clean Diesel race engine is a true production-based engine and a carry-over from the development work done with the Mazda6 GX-class racing cars. The engine is 51 percent stock by parts count, and 63 percent stock by weight. Mazda chose this path as it is the most honest way to demonstrate the performance, quality, durability and reliability of Mazda powerplants.

About Mazda, Mazda Motorsports, and MAZDASPEED
Mazda is the number-one brand for road-racers across North America among both club racers and professionals. Thousands of Mazda-powered grassroots racers compete in various classes with the SCCA and NASA highlighted by Spec Miata, the world's largest spec class with over 2,500 cars built. In 2006 Mazda Motorsports established the MAZDASPEED Motorsports Development Ladder to assist racers in moving up through the ranks. In 2010 this was expanded to include the Mazda Road to Indy. Key to Mazda's success is strategic partnerships with the Skip Barber Racing School and Mazda Raceway Laguna Seca.

Mazda Motorsports is managed by Mazda North American Operations (MNAO). MNAO is headquartered in Irvine, Calif., and oversees the sales, marketing, parts and customer service support of Mazda vehicles in the United States and Mexico through nearly 700 dealers. Operations in Mexico are managed by Mazda Motor de Mexico in Mexico City.