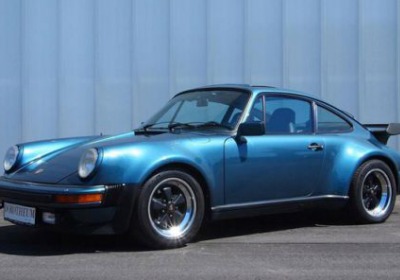 A few weeks ago, we bid a fond happy 40th anniversary to the automotive dark ages of 1973-84 that have come to be known as "The Malaise Era" – the performance ice-age when 160 horsepower was a lot and a 0-60 time of under 10 seconds was remarkable. Like music in the 1980s, everything in automobiledom didn't suck, however. There were a few bright spots. Here are five of our favorites:

While Chevrolet beat them by a decade with the turbocharged Corvair Corsa, the Germans more fully developed turbocharging through racing where General Motors couldn't. Early Porsche 930s (known technically as 911 Turbo Carreras) were a bit crude, with turbo lag that could be measured with an egg timer. They lacked an intercooler as well as brakes that were up to the task, but performance was sensational, with the buff books reporting 0-60 times of anywhere from 4.9 to 5.8 seconds and quarter-mile times of under 14 seconds. This was '60s muscle car performance at the height of the Malaise Era. Sadly, the 930 cost about six times as much as your average muscle car did.


Rob Sass is the Publisher of Hagerty Classic Cars magazine. He is a regular contributor to the automotive section of the New York Times and is the author of "Ran When Parked, Advice and Adventures from the Affordable Underbelly of Car Collecting."

The Germans apparently didn't get the secret memo outlining a gentlemen's agreement within the auto industry that "everything shall be substandard until further notice." The Ur-Quattro, as the car became known, was quite possibly the most significant car of the entire Malaise Era. While it wasn't the first GT with all-wheel drive (Britain's Jensen FF claimed that honor), it took the Germans to get it right and popularize it by dominating rallying.

Malaise-era Corvettes get dumped on mercilessly by Corvette people. The plastic Vega-sourced steering wheel may have been an atrocity, but in reality, there was more good than bad. General Motors did an excellent job of meeting 5-mph bumper requirements, the slotted aluminum wheels introduced during this time were handsome, and quality remained good at the St. Louis plant. Performance was also quite respectable. Road & Track got their four-speed 210-hp L-82 to 60 mph in 6.8 seconds and called it the best-built Corvette they had ever tested.

Datsun had apparently had enough of the "soft discomobile" derision directed towards the 240/260/280Z successor, the 280ZX. The 280ZX Turbo with 180 hp and a five-speed transmission silenced all but the most vociferous critics. With a 0-60 time about a second quicker than the 1970 240Z, it was the most sporting Z car since the 1970s and (hint, hint) enormously underappreciated by collectors to this day.

In much the same way that buying a Duesenberg in 1933 was the equivalent of sticking up your middle finger at the Depression, the 6.9 was the Germans' way of flipping the bird to the Malaise Era. Even with its 6.9-liter V8 in less powerful emission-controlled Federal trim – though still producing 250 hp and 360 pound-feet of torque – the car was capable of at least 140 mph (150 mph in the hands of journalist Brock Yates at Road Atlanta if you believe the stories). Even more impressive was the fact that it was a long-wheelbase, four-door sedan that weighed well over two tons.