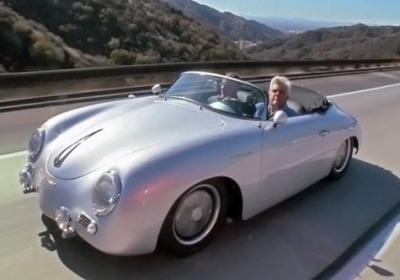 Not a month after the Porsche 911 Reimagined by Singer visited Jay Leno's garage, another artfully restored Porsche has rolled in. This time it's a 1957 Porsche 356A Outlaw, the "outlaw" moniker referring to Porsches that have been restored outside the bounds of period-correct orthodoxy.

This 356A was literally done from the ground up by Michigander Chuck Olenyk, the floor of the car having fallen apart so badly that he couldn't remove the roof at first since it was holding the vehicle together. Olenyk said that of the 2000 hours over seven years that he spent restoring the car, 500 were spent just on repairing the rust. That's undoubtedly some of the reason why when he tried to sell the unrestored car as a roller in the nineties for $1,000, no one would take it off his hands.


Olenyk fitted a mildly tuned engine from a Porsche 912, the transmission from a 356B, the brakes from a 356C, Fuchs mags and a modified replicar Speedster roof from Intermecchnica. It lacks nothing even with just 115 horsepower, and it adds to that with charm and aural appeal. You can see and hear the full story in the video below.