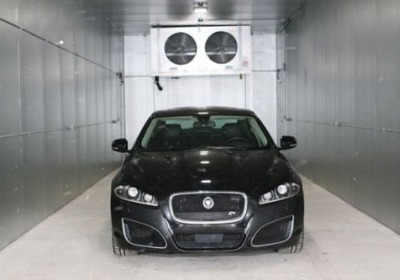 As it begins the rollout of the all-wheel-drive Jaguar XJ and XF models, Jaguar Land Rover has just announced that it has opened a new facility in northern Minnesota for winter testing. Located in International Falls, MN (on the US and Canadian border), the British automaker says it is one of the coldest locations in the Continental US. Jaguar's new Instinctive All Wheel Drive system was developed primarily to help sell more cars in the northern US, so it only makes sense to open a testing area in the US as well.

With temperatures that can drop to minus 55 degrees Fahrenheit, International Falls was chosen to mimic some of the worst weather a Jaguar or Land Rover will ever see. The grounds house testing chambers, various road surfaces and even a frozen lake. This new facility complements the hot-weather testing grounds in Phoenix, AZ.

The official press release is posted below.

Andy Goss, President, Jaguar Land Rover, North America, LLC noted "This facility joins a growing list of Jaguar Land Rover facilities in the United States and reflects the company's commercial aspirations in the U.S. Having such a facility also underscores our dedication to the all weather capabilities of Jaguar and Land Rover vehicles."


International Falls is known as one of the coldest locations in the Continental United States, with temperatures as low as -55 F (-48 C). This extreme weather testing will further allow Jaguar Land Rover engineers to meet the harshest environmental conditions our vehicles will face, no matter where they are driven.

Jaguar Land Rover Engineering Director Martyn Hollingsworth said "The United States is one of our largest global markets, and investing in a world class winter testing facility here is imperative to the success of Jaguar Land Rover in North America."

The United States is one of the leading global markets for both Jaguar and Land Rover. As an example of Jaguar Land Rover's commitment to the America, the recently introduced Jaguar Instinctive All Wheel Drive* technology was developed primarily for the North American market. The recently introduced all-New Range Rover was extensively tested at the Jaguar Land Rover hot weather test facility in Phoenix Arizona.

Paul Nevanen, Director of the Koochiching Economic Development Authority stated: "The construction of this facility by Jaguar Land Rover represents a partnership with the community that will bring a significant economic impact to this area."